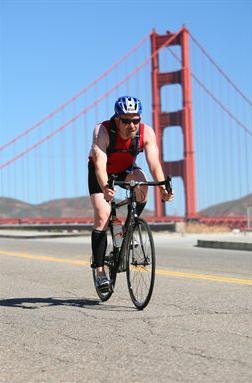 Physics teacher Mark Hannum and Chemical Analysis lab director Brian Kennedy spent June 10 competing in a triathlon each, but on opposite coasts of the country.

“The hardest part was definitely the biking for me. I was really unprepared for how hilly it was,” Hannum said.

Hannum finished the triathlon with a total time of three hours, 59 minutes and 35 seconds, making him the 1,417th race finisher out of 1,713 total participants.

“I was looking for a unique challenge and that particular race is very unique,” Hannum said. “There’s no other like it.”

Back in Cambridge, Md., Kennedy competed in the Ironman 70.3 EagleMan triathlon, a half Ironman that puts athletes through 1.2 miles of swimming, 56 miles of biking and 13.1 miles of running. He pursued the race for personal reasons.

“I like doing lots of exercise and staying healthy,” Kennedy said.

Kennedy placed 685th out of 1,739 total participants with a time of 5 hours, 39 minutes and eight seconds. When he reached the finish line, the physical tolls of the race set in.

“I was thoroughly tired and sore and hungry,” Kennedy said.