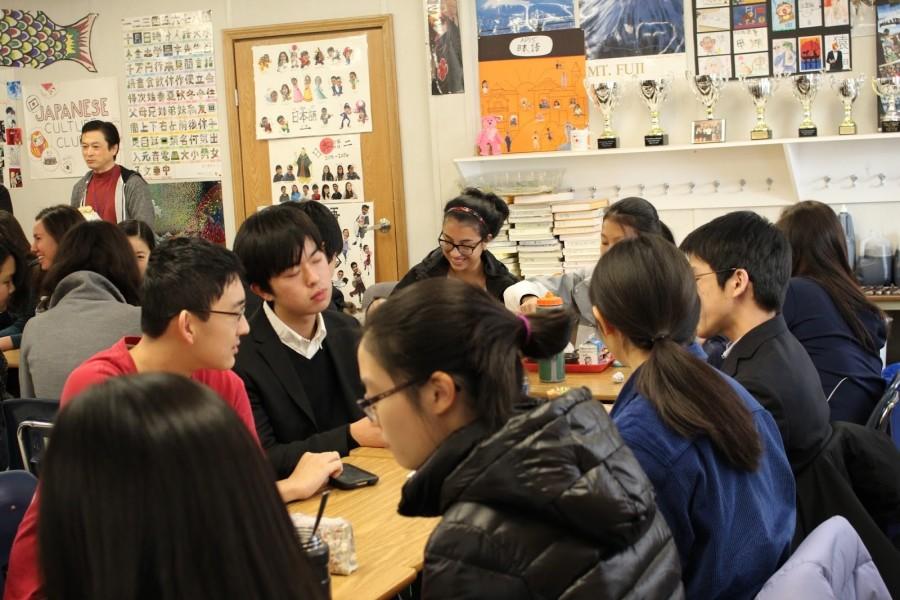 Amidst the crowded classroom, a pair of students of different ages, ethnicities, schools, and countries are animatedly discussing their favorite television shows, eagerly switching between English and Japanese. During a social lunch on Dec 6th in trailer 44, 10 Japanese high school students joined Jefferson students taking Japanese language classes as part of a five day cultural exchange program. These students also appeared in many STEM classes during fifth and sixth period on Wednesday, learning about the different schooling environment of Jefferson and other American science oriented high schools.

“These students are from ‘Super Science High Schools’, specialized in STEM, senior Katie Shen said. “We’ve had students take them to various research lab, math, and science classes during 5th and 6th period to see what TJ is like.”

As part of the ‘Super Science High School’ program, the Japanese students conducted research similar to Jefferson senior research lab projects and presented their findings during Wednesday eighth period, A and B blocks, with topics ranging from Shiitake mushroom to fluorescence glow.

“Their English is really good. Yokohama, one of the main visiting schools, practice their presentations in English and practice English questions. It doesn’t really matter if you don’t speak Japanese, if you want to you can chat with them no problem,” said Shen.

Although able to speak and communicate in English, many cultural differences remained between the Japanese and Jefferson students.

“Kids in Japan generally do most of the custodian work themselves. They have a time set out of the schedule to clean the school, and, in most schools, they serve lunch to each other, which I think is really cool,” said sophomore Kai Riley.

However, many similarities between the students could be found, especially as both groups came from schools specialized in math, science, and technology.

“We’re all very serious about our studies,” said Shen. “In Yokohama, the main school that’s visiting, If you’re a first year in their high school, it’s equivalent to our sophomore grade. While we would consider older grades first, for the Yokohama students, if you’re good enough to go [on this exchange program], and you beat out the upperclassmen, you can go.”

Clubs and academic activities also seem to be an important similarity.

“One of the main similarities is that everyone has a club or activity that they go to after school, be it studying, sports, or music. It makes sense, since it helps foster teamwork, friendships, and skills they can use after college,” said Riley.