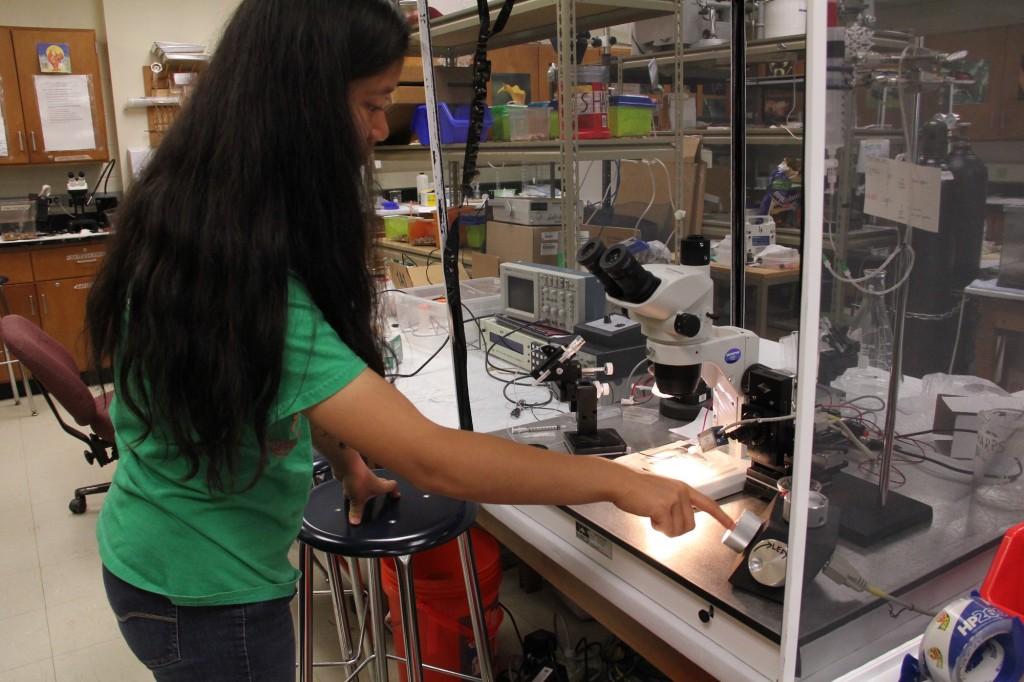 The Aplysia californica is not your average sea slug. Although this shell-less slug may be small, it still manages to be a focus in the world of neuroscience—and more specifically, Paul Cammer’s Neuroscience senior research lab.

Commonly referred to as the Aplysia sea slug, scientists use this creature in studies on memory mechanisms because of its peculiar response known as the siphon-withdrawal reflex. The sea slug experiences involuntary reflexes with its siphon, an anatomical structure that allows the flowing of water in and out of its body in order for it to perform basic functions.

When poked, the siphon is withdrawn into the body as a defensive reflex. However, after continuous probing, habituation occurs, which is when the reflex slows until there is no response as the slug retains the memory of the prods and becomes accustomed to the stimulations.

While the seniors in the research lab are focusing on this special reflex, scientists in the field are looking further into how this particular research can delve even deeper, like the electric signals of neurons or the various mechanoreceptors within in the nerve of the Aplysia.

Lynne Fieber of the University of Miami Rosenstiel School of Marine and Atmospheric Science has recently performed research and written an article about the study on a certain receptor within the neurons of the Aplysia sea slug that responds to electrical signals.

“The overall goal of my research is to understand aging at the level of molecules in the nervous system. I work on the sensory neurons of the Aplysia pleural ganglion that control movement of the tail,” Fieber said, “We get insights into what basic mechanisms of aging exist in the nervous system.”

“The key to all of this is that neurons in Aplysia work fundamentally the same as they do in humans, so what we learn about Aplysia neurons can often inform the function of neurons in humans,” Thomas Fischer, an associate professor of psychology at Wayne State University, said.

Fischer has written on the different mechanoreceptors of the reflex inside the sea slugs.

“Aplysia has the largest neurons in the animal kingdom, the neurons are easy to identify as individuals, and synaptic connections between identified neurons can easily be studied,” Fischer said, “Further, one can directly relate individual synapses to the behavior of the animal, something that can’t be done in animals with more complex nervous systems.”

Back in the Neuroscience lab, seniors Laura Minnema and Jacqueline Tran used the Aplysia sea slug for their research. They have developed and are implementing a methodology to measure the intracellular signals made by the ganglion, the group of neurons inside the body responsible for the reflex.

The sea slugs were specially chosen because they were easy to dissect, as Tran described them to be “excellent model organisms due to their large abdominal ganglion.”

Once the siphon was dissected, cells were collected and placed for viewing under a microscope. A micromanipulator, connected to a head stage with an electrode, was then used to penetrate the cells. Intracellular signals showed up on an oscilloscope to the side, thus providing the data necessary.

Solutions of serotonin, a neurotransmitter common in humans, became the independent variable in the experiment, and were used in order to observe the effect on the intracellular signals.

“We can branch out from serotonin to other neurotransmitters to see how they affect habituation,” Minnema said.

Although the outside world’s research is advancing beyond just the withdrawal reflex, Minnema and Tran believe their research and methodology will prove beneficial for the world of neuroscience.

“It’s the next step for the lab,” Minnema said.