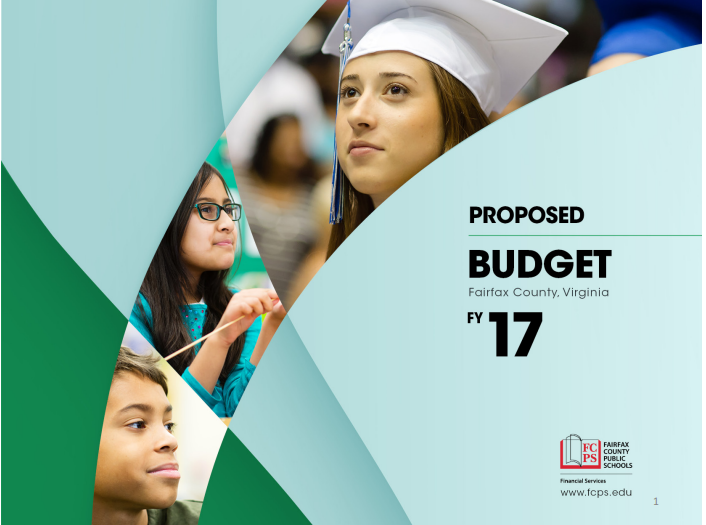 Karen Garza released her budget on Jan. 8th, which included no reductions in teacher salaries. Details of the proposed budget (cover page pictured above) can be found on the FCPS website.

With 100 million dollars I could buy an Airbus A320neo, a 3-D rollercoaster, a year’s worth of jewelry from the Home Shopping Network, or a four-lane interstate highway, and I also would be able to pay for the annual expenditure of the Republic of Palau. In June last year, Fairfax County Public Schools (FCPS) schools predicted a 100 million dollar deficit in the 2016-2017 school year. Seeing how much I could buy for 100 million really puts the implications of that large of a deficit in perspective. Following the announcement of the deficits, FCPS released a “budget cut menu” that showed what could potentially be cut and how much money it would save. So, when I heard that Karen Garza, superintendent of FCPS was unveiling the budget on Jan. 5, I was slightly anxious to find out what it would be cut, and how much it would impact my education.

While I expected changes to teacher salaries and hours in the school day, Karen Garza’s new budget includes no reductions to instructional programs or services to students and schools. In fact, there’s an increase in employee salary, reduction in elementary class sizes, and 165 new classroom personnel.

Garza’s aims to maintain a level of excellence in the school system and combat the $100 million dollar deficit.

“Today, we propose to stop a decade of disinvestment in our schools,” Garza said. “We are proposing a budget that looks ahead and begins the slow process of restoration and renewal from the nearly half a billion dollars cut from the FCPS operating budget since 2008.”

The proposed budget is a pleasant surprise, but the question is: where is this money coming from? It can’t come from increasing taxes because the state of Virginia prohibits increases in taxes due to school requirements, and the expenditure isn’t being balanced by reductions as Garza is avoiding cuts. According to the Proposed Budget released by FCPS, revenue will come from many different places, including transfers from the Fairfax County government, state aid and sales tax, and county funds.

While the School Board has thoroughly worked out the budget for fiscal year 2017 in a 290 page PDF, I can’t help but feel as if it won’t all work out. FCPS develops its budget before the governor releases his budget proposal. If the difference between the two budgets is too large, it could lead to complications in the school’s board meticulously planned fiscal year budget for 2017. The Board of Supervisors has yet to adopt the proposed budget. and it may not be adopted exactly how the School Board expects it to be. In order to balance the budget, an increase of 6.7% percent is required. However, the board rarely approves it exactly as is, and often settles for an increase

For now, all we can do is wait until Apr. 5, when the School Board presents the budget to the Board of Supervisors.