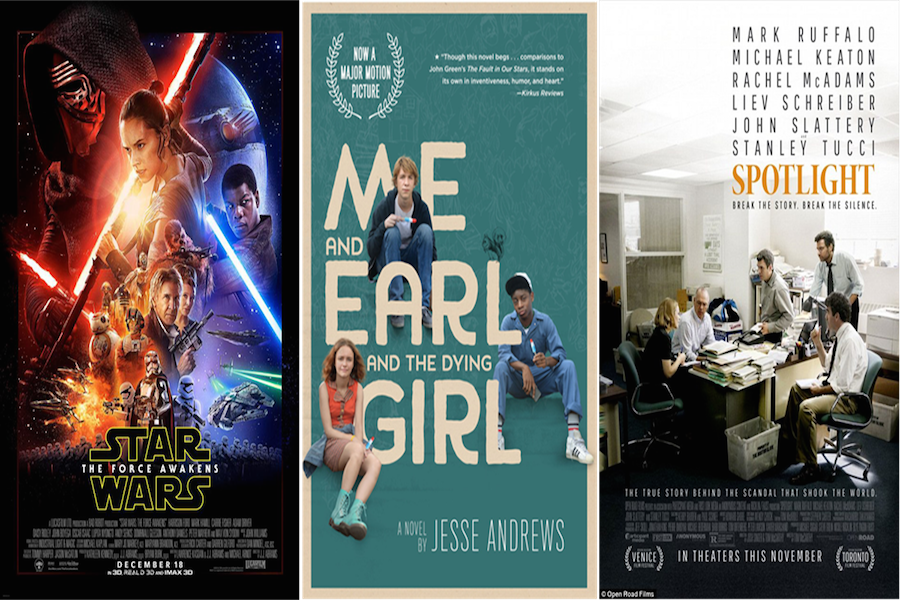 Movie-wise, 2015 was an exciting year. From popular series to novel adaptations to independents, this year presented movies that captivated a variety of audience members. Films from 2015 introduced a number of breakout actors, including Brie Larson in “Room” and Alicia Vikander in “The Danish Girl”. In addition, long-anticipated franchise films, Jurassic World and Star Wars: The Force Awakens, were released. Let’s check out the top 15 movies of 2015.
15. Kingsman: The Secret Service

Eggsy Unwin (Taron Egerton) is selected to join a spy organization called the Kingsman agency, and moves forward to experience challenges and tests in order to become a spy. Humor, likable characters, and exciting fight scenes made “Kingsman: The Secret Service” an unexpected hit. In fact, a sequel to the film was announced to be made for 2017.

Saoirse Ronan plays Ellis, an Irish immigrant who moves to Brooklyn. Ellis settles into Brooklyn and falls in love, but when she visits Ireland again, she becomes torn between her past and present lives. Though the storyline wasn’t innovative, the acting and art direction makes “Brooklyn” a heartwarming film.

Sharing a name with a track from Brian Wilson’s self-titled album, “Love & Mercy” focuses on two timelines: one being Beach Boys member Brian Wilson’s descent into mental struggles, played by Paul Dano, and the other on his life years later, played by John Cusack. The later timeline includes Wilson falling in love with Melinda Ledbetter (Elizabeth Banks), who helps free him of his abusive therapist. “Love & Mercy” provides insight into Wilson’s mind and Dano, formerly known for playing Dwayne in “Little Miss Sunshine”, especially delivers a solid performance, one that even Wilson himself found convincing.
12. Sicario

“Sicario”, meaning “hitman” in Mexico, follows FBI-agent Kate Macer (Emily Blunt) as she joins a special government task force to combat a drug cartel whose bomb killed her team members. The gritty movie depicts the effects that the drug war leaves on people, and the cinematography, done by Roger Deakins, heightens the hard-to-watch horrors.

Based on the true story that resulted in Rolling Stone writer David Lipsky’s “Although of Course You End Up Becoming Yourself: A Road Trip with David Foster Wallace”, “The End of the Tour” chronicles Lipsky’s (Jesse Eisenberg) five day interview with David Foster Wallace (Jason Segel) towards the end of his book tour for “Infinite Jest”. Viewers unfamiliar with Wallace’s work can still appreciate the character portrayals in the thought-provoking movie.
10. Beasts of No Nation

Produced by Netflix, “Beasts of No Nation” is about a kid named Agu (Abraham Attah) who involuntarily becomes a child soldier when civil war spreads to his community. Based on a novel set in an unknown African country, the movie depicts a bleak atmosphere, and it doesn’t restrain from displaying the harsh effects of war on-screen.

The newest “Peanuts” film may have transitioned to computer animation, but it did not lose nostalgia from the past films. Charlie Brown once again shows viewers his resilience by always trying his best, even though nothing seems to go his way, while Snoopy goes on another adventure to defeat the Red Baron.

Another animated film, “Inside Out”, is an endearing watch for the whole family. It is about the adventures of the emotions of a young girl. The character designs are remarkable in a way that they effectively visualize different emotions and give them personalities. Throughout the movie, “Inside Out” pinpoints a wide range of emotions, but the ending will surely cause viewers to feel joyous.

The fourth installment in the “Mad Max” franchise, “Mad Max: Fury Road” gained recognition for its impressive visual effects and fast-paced action. Some also praise it for incorporating progressive themes. Set in a future where the world has become a desert wasteland, a Furiosa (Charlize Theron) leads the five wives, women selected by tyrant Immortan Joe, to escape. Max finds the group early in their journey and joins them. Though the movie itself has limited dialogue, the actors still manage to convey drama throughout the film.
6. Room

Adapted from Emma Donoghue’s novel, “Room” is about Ma (Brie Larson) who was kidnapped in her late teens and had a son, Jack (Jacob Tremblay), raising him for five years confined to a single room. As Jack’s knowledge of the world grows, Ma decides to escape. The second half of the movie chronicles Ma and Jack’s adjustment to life outside of the room. Larson and Tremblay give compelling performances in “Room”, and the composition of the scene where Jack escapes to the outside world is a stunning, defining moment.
5. The Big Short

“The Big Short” is based on a nonfiction book by Michael Lewis and follows people in the finance business who predicted the fall of the housing and stock market in 2008. Viewers completely unfamiliar with the topic may become confused because of the movie’s fast pacing. However, the movie has narration and the storyline pauses at a few points to cut to cameos of celebrities, including Margot Robbie and Selena Gomez, explaining some of the terms. Despite the serious topic, the movie turned out to be humorous and entertaining.
4. The Martian

Over the past few years, hit science fiction movies such as “Gravity” and “Interstellar” have drawn much attention to the improving technology in film. Similar is “The Martian”, based on a novel by Andy Weir, which portrays Mark Watney’s (Matt Damon) survival on Mars after his team had presumed him dead and left him on the planet during an evacuation. The effort to make the movie look as realistic as possible is evident, and Damon gave a convincing performance.
3. Spotlight

With arguably the strongest acting ensemble of 2015, the “Spotlight” story engaged viewers this fall. The film was based on the true story of an investigative team at the Boston Globe, named Spotlight, who exposed a child molestation scandal in the Catholic church. The script, authored by Josh Singer and director Tom McCarthy, was very well written, and none of the scenes felt extraneous. The movie presented the victims’ stories delicately but also directly. “Spotlight” is nominated for three Golden Globes.
2. Me and Earl and the Dying Girl

“Me and Earl and the Dying Girl” charmed viewers with the story of a teen named Greg (Thomas Mann) who makes films with his friend Earl (RJ Cyler) and grows closer to his old friend Rachel (Olivia Cooke) after she is diagnosed with cancer. The three actors effectively convey the humor embedded in this bittersweet story. The most appealing aspect of “Me and Earl and the Dying Girl” was how it was written more realistically than other stories of the same genre; viewers didn’t fall in love with the main characters right away and the cancer story was never romanticized. The screenplay is by Jesse Andrews, who also wrote the novel the movie is adapted from. The film’s style almost resembles Wes Anderson movies, well known for their charisma and aesthetic.
1. Star Wars: The Force Awakens

“Star Wars: The Force Awakens” kept the elements that distinguishes the “Star Wars” franchise from others on the big screen, while presenting a refreshingly unique storyline. Directed by J.J. Abrams, the movie displayed mature content but in a family-friendly manner. It has broken box office records, including greatest opening day of all time, and already grossed over one billion dollars. “Star Wars: The Force Awakens” received acclaim from both longtime fans and first time viewers, overall receiving more praise than the prequel movies did. The movie stars newcomers Daisy Ridley, John Boyega, and Oscar Isaac, who played Rey, Finn, and Poe Dameron respectively, with energy and depth. New droid character, BB-8, also amused viewers because of its adorable character design. The hype leading up to “Star Wars: The Force Awakens”, in addition to the viewers’ positive reactions after seeing it, makes this the top movie of 2015.