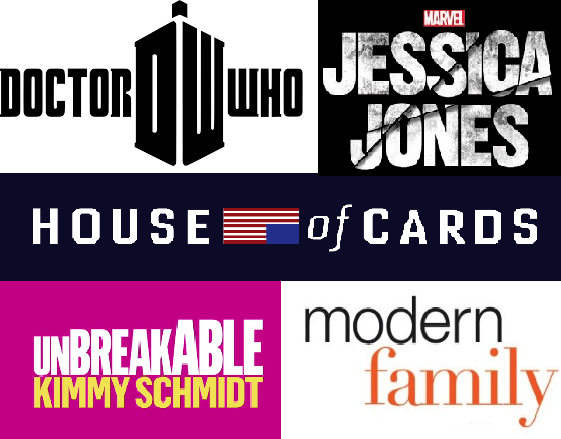 From comedies to dramas to everything in between, this year brought many new television and Netflix shows for the public's entertainment. While some may not have done so great, others like "Jessica Jones," and "Doctor Who," definitely rose to the occasion.

This year has been filled with continuing hits from the previous year along with many new shows, both on television and on Netflix. However, a few stood out among the others – these are the top 15 television shows of 2015 (in the order of release/premiere dates from earliest this year to latest).

With its final season this year, the famous television show “Parks and Recreation,” definitely went out with a bang. This season had a greater emphasis on characters with previously smaller roles, such as Garry Gergich (Jim O’Heir) and Donna Meagle (Retta), because of Ann Perkins (Rashida Jones) and Chris Traeger (Rob Lowe)’s departure in Season 6. There were a few, overarching storylines, such as the feud between Leslie Knope (Amy Poehler) and Ron Swanson (Nick Offerman), and Leslie’s never-ending goal to better the parks of Pawnee, Indiana. Most importantly, this season ended with a look at what was in store for characters in the future, and provided positive closure for viewers.

The Netflix original series “House of Cards,” continued its excellence in this third season. Starting the season with a new president (Kevin Spacey) and an injured Doug Stamper (Michael Kelly), the show continuously brought in new surprises and revelations to keep viewers interested. With multiple nominations during the 22nd Screen Actors Guild (SAG) awards and during the 67th Primetime Emmy Awards, the show continued its captivation of viewers in this successful season.

Another Netflix series, “Unbreakable Kimmy Schmidt,” follows the story of Kimmy Schmidt (Ellie Kemper) after escaping a cult in Indiana by moving to New York City, where she meets new friends and gets a new job. The show and its actors have won multiple awards and have been nominated in many award shows like the Primetime Emmy Awards, the Critics’ Choice Television Awards, and the Gold Derby TV Awards.

The fifth season of “Game of Thrones,” has left an enormous mark on the television industry, specifically by setting the record for the most number of Emmy Award wins for a series in one year. Starting with the revolt against Daenerys Targaryen (Emilia Clarke), the hit drama series gives viewers the action and excitement that has resulted in consistently increasing numbers of views per season, with the highest views this season.

The comedy-drama “Orange is the New Black,” has finished its third season, one that has been nominated for and won many awards, this year. With nominations in categories such as casting, editing, and best drama and comedy series, the Netflix original series sheds a new light on the lives of prisoners, like Piper Chapman (Taylor Schilling), in a women’s federal prison. Fans now look forward to the release of the fourth season on Netflix in 2016.

A hit drama-thriller, “Mr. Robot,” follows the story of cybersecurity worker and online hacker Elliot Alderson (Rami Malek), and his recruitment by the anarchist who calls himself “Mr. Robot,” (Christian Slater). The show’s depiction of Elliot’s internal struggles of deciding what’s right and what’s wrong, and of coping with his depression and anxiety has won over many viewers and accolades, such as the “Television Program of the Year,” award in the American Film Institute Awards.

Fans of the famous BBC America show “Doctor Who,” were taken on yet another ride this season. With the twelfth doctor (Peter Capaldi) and his companion Clara Oswald (Jenna Coleman), the series continued the pair’s journey in the Time And Relative Dimensions In Space (TARDIS) machine. This season brought back common enemies from the past, such as the Daleks, a species of robots with the one intent of killing those that are different, and new ones like Sandmen, creatures made out of sleep dust. Nonetheless, the season did not fail to bring new twists and surprises into the story, some good, and others that viewers will never get over.

8) How to Get Away With Murder (September-Present, Season 2)

The ABC drama “How to Get Away With Murder,” delivered mystery and shocking revelations with the start of its second season this year. Having already dealt with one murder in season one, defense attorney and law professor Annalise Keating (Viola Davis) and her students must now face the “disappearance,” of Wes Gibbins (Alfred Enoch)’s girlfriend Rebecca Sutter (Katie Findlay), when in reality she’s been murdered by Annalise’s associate lawyer Bonnie Winterbottom (Liza Weil). With the continuous switches from the future murder scene to the present, viewers were constantly given surprising information that led to the true reveal in the mid-season finale in November.

Based on the film “Limitless,” from 2011, directed by Neil Burger, the television series of the same name centers on the life of Brian Finch (Jake McDorman) and his encounter with the drug NZT-48, which can make him the smartest person in the world for 12 hours after having taken the drug. The show describes how he uses this ability to then assist an FBI agent named Rebecca Harris (Jennifer Carpenter), and has kept viewers captivated with the subsequent high action and suspense.

With multiple awards and award nominations for its previous seasons, “Modern Family,” continued its success with this seventh season. The major love story of Haley Dunphy (Sarah Hyland) and Andy Bailey (Adam DeVine) constitutes a major component of the season, along with Alex Dunphy (Ariel Winter) and her time at college, Phil Dunphy (Ty Burrell)’s job as a realtor, and the hectic-ness of all the characters in the show. The show’s unique take on family life has helped keep the show’s high standards, and has kept viewers wanting more for episodes coming in the new year.

11) Once Upon a Time (September-Present, Season 5)

With the continuous battle between love and power, “Once Upon a Time,” takes its fairytale and real-world storylines to a whole new level this season. Set in Storybrooke, Maine, famous fairytale characters like Snow White (Ginnifer Goodwin), the Evil Queen (Lana Parrilla), and Prince Charming (Josh Dallas) have been transported to a world away from their homes, where they were faced with a complete loss of their previous identities in season one, a problem that has since been fixed with the help of Snow White’s daughter, Emma Swan (Jennifer Morrison). The shocking season 5 mid-season finale now leaves viewers on edge for the show’s return in March.

The new ABC crime drama “Quantico,” aired its first episode this year in September, and had high ratings right off at the start. The story of Alex Parrish (Priyanka Chopra) as an FBI agent-in-training in Quantico and her struggle to reveal the identity of whoever was framing her for a major bombing in New York City kept viewers on edge with new truths being revealed every episode. Multiple side stories also took place during the season, including different love interests, conflicts within the FBI training facility, and other issues that kept the story moving forward until the shocking twist at the end of season 1.

The show “Jane the Virgin,” a romantic comedy-drama centered on the life of Jane Villanueva (Gina Rodriguez), takes viewers on a ride as they view the aftermath of her accidental insemination during a checkup. With a recent murder shaking up the story, viewers anxiously await what will happen next. The show has become critically acclaimed with awards like those from the EWwy Awards and the Voice Arts Award.

As the longest-running North American science-fiction series to date, “Supernatural,” continues its success in this eleventh season. As they fight supernatural creatures, brothers Sam (Jared Padalecki) and Dean Winchester (Jensen Ackles) must now face the Darkness (Emily Swallow), a creature released in season 10. The show keeps its high standards with many awards, like the award received in 2014 for the “Best Overall 2013 Science Fiction Film or Television Script (for the episode ‘Sacrifice’).”

A new Netflix original this year, “Jessica Jones” focuses on the adventures of the Marvel-based character and some of her superhuman abilities in New York City. Detective Jessica (Krysten Ritter) was tormented by the villain Kilgrave (David Tennant) and his ability to control minds in her past, and his reappearance results in a cascade of problems that she must face again. While all of season one was put online in November, fans of the show must now wait until season two, which may not go up for a while, for the show’s continuation.