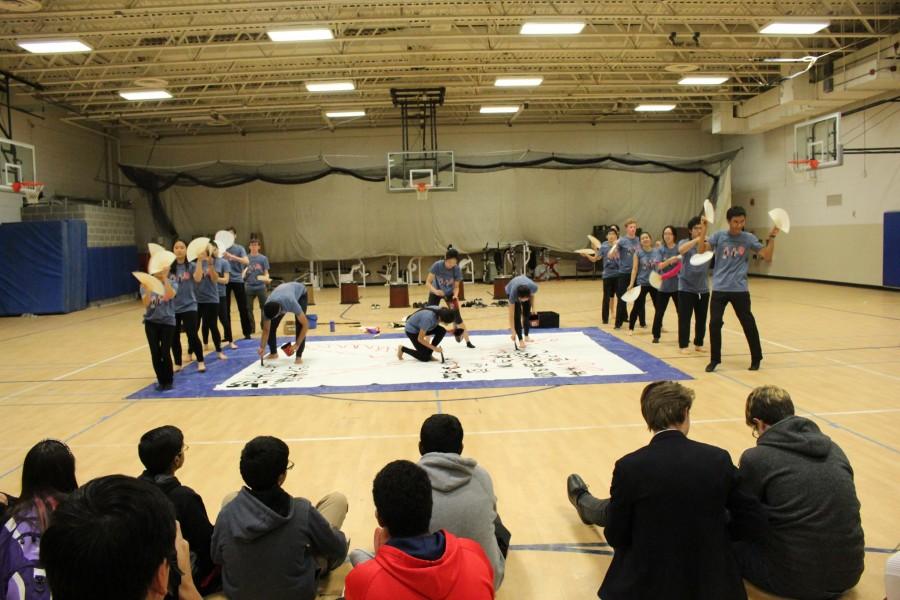 During the festival, students had the opportunity to see for themselves a wide variety of Japanese cultural activities and foods. JNHS prepared samplings of traditional Japanese foods, such as sushi rolls, Japanese curry, and inarizushi (fried tofu with rice stuffed inside). These foods were highly popular among the students, and some items sold out within 15 minutes of the start of the festival blocks. After eating, students had opportunities to try Japanese games, including traditional tops and kendama (balancing a ball on a mallet). Jefferson’s Japanese teacher Koji Otani then led JNHS students in a demonstration of the making of omochi (Japanese sticky rice cakes), which they were then invited to eat while they watched a JNHS shodo (calligraphy) performance at the end of each block.

“The festival is a wonderful opportunity to increase student interest in Japanese culture, as it is a very accessible venue available to students across TJ, whether or not they are taking Japanese right now,” Otani said.”

“Months of hard work went into preparing the event,” JNHS president Katie Shen said. “Even though the festival happens in December, the JNHS officer team has to begin planning at the start of the school year as we organized everything from making food to choreographing the shodo performance.”

To make the omochi-making demonstration possible, Otani borrowed a traditional kine and usu (mortar and mallet) pairing from the Japanese Embassy in Washington, D.C. Otani had done it before, but not within the last seven years. This year was the first time that JNHS held the shodo performance and omochi making activities at the festival.

“It is very exciting that we could demonstrate both the shodo performance, which we started several years ago with our sister school in Japan, with the omochi-making for a combination of unique experiences at the event,” Otani said.

Shen also added that she and the other JNHS officers hope they can attract students interested in Japanese language and culture.

“Even though the Japanese program is one of the smaller language programs at TJ, we still manage to put on big events, and our food doesn’t hurt either,” Shen said.   “I hope that events like this will continue to help raise student interest and expand the program in future years.”