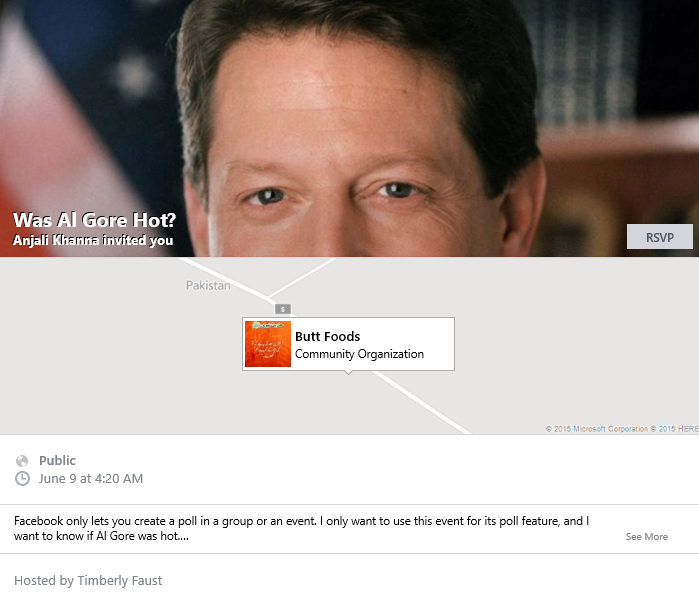 "Was Al Gore hot?" is one example of a fake Facebook event that has collected more than 13,000 RSVPs. This event has an attached poll that asks this question and answer choices included "he's no Biden but he's up there" and "I don't think Al Gore was hot, but I 'get it'".

“Eating french fries and turning into a potato because finals”, held at “McDonalds” and “National Sad Boy Day”, held at “lonely” are two examples of fake Facebook events, which have recently begun to appear on many newsfeeds.

Students and friends of many on Facebook have said they are “attending” events that don’t exist. Some fake events featured popular figures like Adele or Drake while some included dropping out of school or getting out of finals.

Some students enjoyed “attending” the fake Facebook events. Many events included jokes about popular figures, school and finals, and some students found these entertaining.

Other students disagreed. Some students thought that the fake events were bothersome because their Facebook friends said they were going to these events so often that notifications frequently showed up on their newsfeed.

“You’re obviously not going to do anything with them,” sophomore Catlinh Nguyen said. “It’s just a lot of spam notifications, like people keep posting in the event and it’s not really relevant to how I’m living my life.”

Fake events became very popular very quickly. The event “drop out of school and turn into JOHN CENA” , “held” Dec. 19 at WWE received 16,000 “RSVPs”, as well as 25,000 more people who said they were “interested”. Students said they thought there were multiple reasons for these events becoming popular.

“I think fake Facebook events became popular because so many people can relate to them or because people think the events are funny,” freshman Johnathan Huynh said. “[Also, if] everyone’s interested in [attending a fake Facebook] event, you’d be left out if you [said you] weren’t.”

Although many students have said they were attending these events, few have created any fake events. Some felt that trying to get thousands of interested people would be too hard, because other people they knew had tried to do that and had been unsuccessful.

“It seems like a lot of work, and I don’t think I’m funny enough for that,” Bhargava said. “I think I’m getting a little annoying, just because I’m saying yes to like 15 events, and I don’t [want to create one and have] people see that on their on their feed every time they look.”

Although not all students agree that all fake Facebook events are funny, many have at least one they can relate to or that they find amusing. Fake events that have been created on Facebook range in topics so students have many choices of favorite events to choose from.

“My favorite event is the one where you cry and eat bread by yourself on the floor,” Huynh said. “Personally I think it’s hilarious how people started to go along with all of this by asking questions like, ‘What kind of bread?’, ‘Is it gluten free?’, ‘What kind of floor?’”