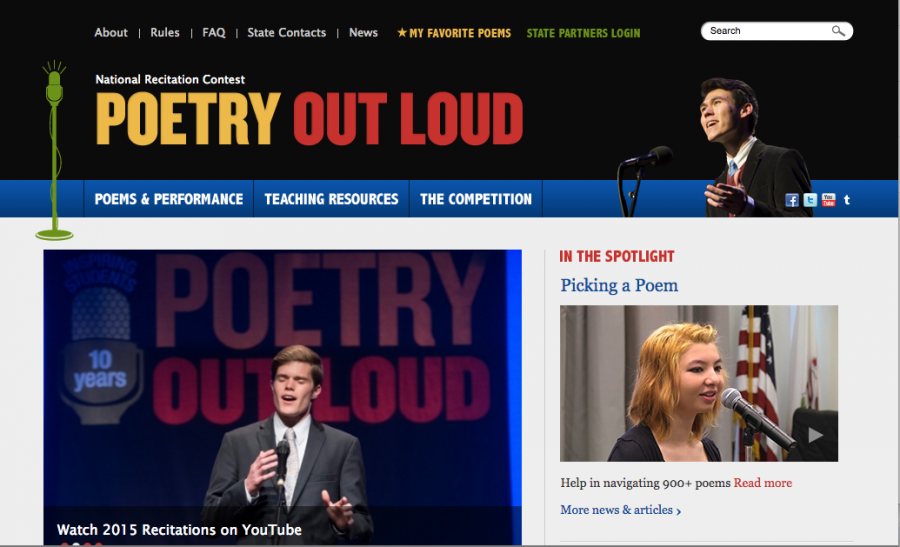 Photo courtesy of www.poetryoutloud.org. Students competed in the finals competition held on Dec. 4 at the Black Box theater during eighth period.

Under the purple light, the finalists of this year’s school-wide Poetry Out Loud competition performed their pieces in the Black Box theater as their recitations filled the quiet space.

On Dec. 4, the Poetry Out Loud competition was held for both A and B blocks during eighth period. After the interest meeting was held back in September, the finals consisted of the recitation of two poems by each finalist.

“I participated in Poetry Out Loud because it allows me to share my love of poetry with other students who may think they don’t like poetry,” senior Ellie O’Reilly said. “Poetry Out Loud’s anthology of poems is extremely diverse, which lets people with completely different tastes for poetry perform in the same competition which I love.”

Instituted by the National Endowment for the Arts and the Poetry Foundation, the annual contest aims to promote the appreciation of poetry among youth. The finalists of the contest included freshmen Gwendolyn Jacobson, Bindu Srinivasa and Siona Prasad, sophomores Will Briffa, Olivia Johann, Louise Hicks and Timothy Liu, juniors Josh Cummings, Sam Libberton, Adithi Sundararaman and Andrew Yoder and seniors Matthew Sun and Abby Peterson along with O’Reilly.

During the competition, the finalists recited poetry that were selected from the list provided by the contest, such as “Ecology” by Jack Collen.

O’Reilly, who received the highest score on her recitations, will qualify to participate in the regional contest that will be held on Jan. 22. The winners of the state-wide contest will compete in the national competition in Washington, D.C. from May 2-4, 2016.

“One of my favorite things about poetry is that there is such variety between poets and poetic forms and time periods that anyone who says they don’t like poetry just hasn’t read the right poems yet,” O’Reilly said. “Not everyone will fall in love with Shakespearean sonnets but that doesn’t mean that those people should give up on reading poetry.”