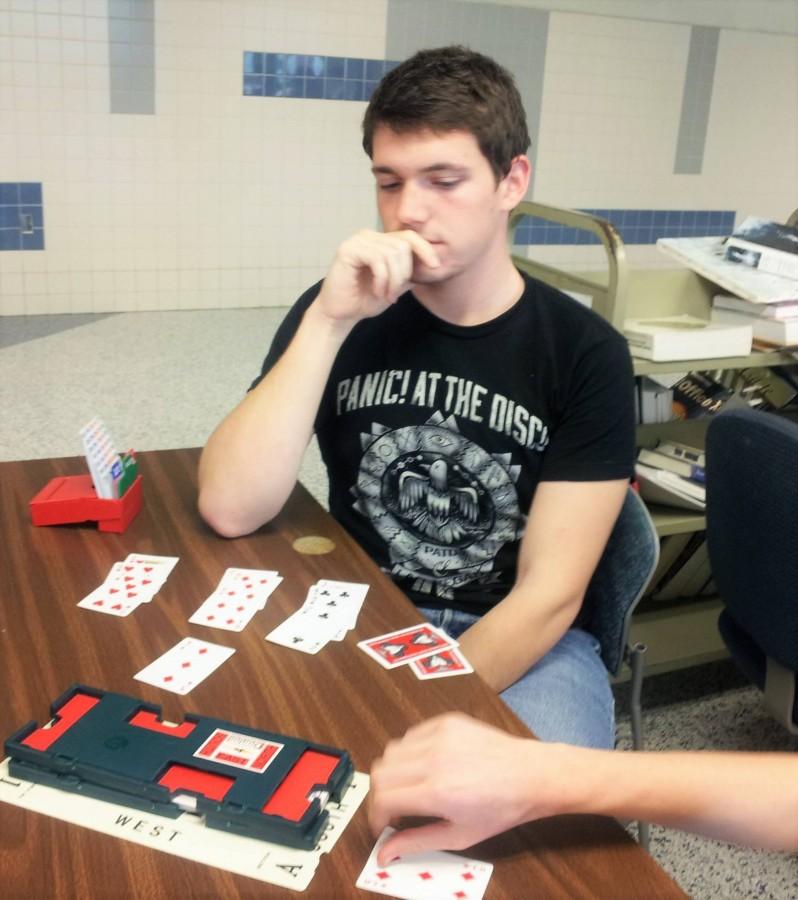 Organized by sponsor Dr. Thomas Larson and volunteers from the American Contract Bridge League, the members of the TJ Bridge club gathered Dec. 4 during Friday 8th period to compete in the second TJ bridge tournament of the year. Once every quarter, members and their partners play against other pairs in a duplicate bridge tournament.

“It’s called duplicate bridge because the hands are already made. They stay at the table, the players circulate, and at the end they compare how the players did with each hand,” Larson said.

Pairs play as either a East-West team or a North-South team depending on where they sit. Although, there is no prize for winning, the tournaments are organized to prepare members for ones outside of TJ.

“When they go to play in the community, they’ll play like this. This summer, when the youth nationals are, I want them to know how to use the bidding box rather than just shuffling and dealing,” volunteer Suzanne Abrams said, “Kids from all over the United States will come, and [you can win] scholarship prizes.”

In addition, Jefferson students participate for the love of the game because tournaments don’t require excessive preparation. “A lot of my friends started doing so I came sophomore year, and I just got more and more into it,” co-president Aidan San said, “I come to bridge club most weeks and practice by playing casually.”

In the end, sophomore Leo Desruelle and freshman Robert West won out of the East-West pairs. “I felt delighted, especially because my partner and I blundered hard on a couple rounds only for that to not matter,” Desruelle said. Juniors Colin Buckley and Harry Han won for the North-South pairs with 77.08% of the possible points with second place scoring 60%. “It feels good; Harry and I have been going to the club and tournaments since freshman year, and it’s a bonus to end up winning one by that much,” Buckley said.

To learn more about bridge, come to bridge club 8th periods on Friday. “If you like games, and you like math and logical thinking, play bridge,” Abrams said.