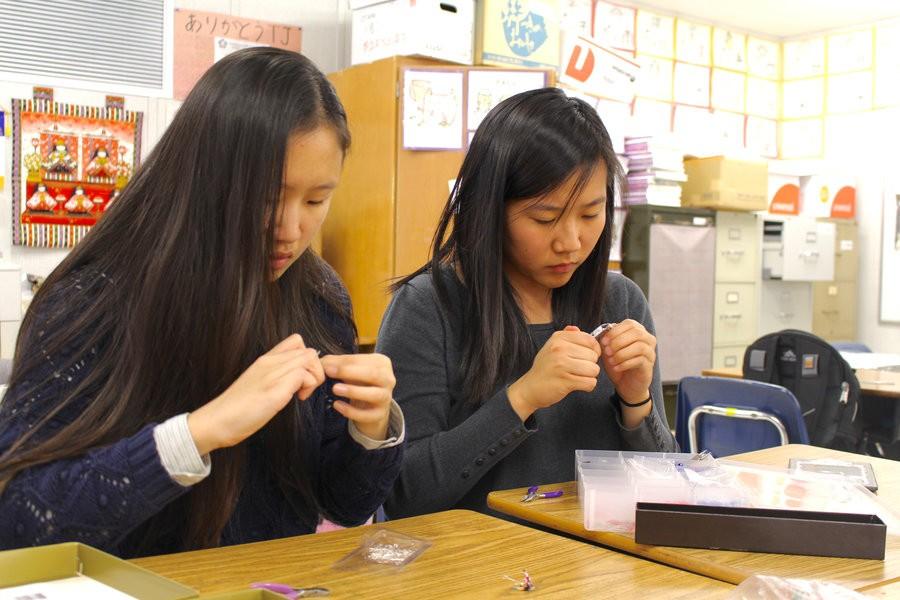 In the midst of holiday seasons coming and going, a small club is hard at work on a big project.

National Japanese Honor Society (JNHS) is preparing for their annual event celebrating Oshōgatsu, the Japanese New Year. It is one of their main events of the year, and the club is working to make it successful.

“[Oshōgatsu is] basically for raising funds for the Japanese national honor society and promote Japanese culture in our school too, because we’re a pretty small program, to gain awareness,” JNHS publicist Kathy Jiang said.

During their eighth period meetings, the group makes origami crane earrings to sell at the festival. The decorative paper birds are an important symbol in Japanese history.

“We’re going to be doing a mochi making demonstration, with a wooden [bucket containing unmade mochi] that you hit with a wooden hammer,” club treasurer Yeonju Kim said. “And mochi is, if you don’t know already, sticky rice. You pound the rice to make it softer,” Jiang said.

Folding cranes, practicing calligraphy, and choreographing fan dances are some of what needs to be done before the celebrations can begin. The club would appreciate interested students to help with these Japanese New Year preparations at eighth period JNHS meetings, or support the club at Oshōgatsu.

“Come to Oshōgatsu! It’s going to be really fun. It’s on December 11th, A and B block,” Jiang said.