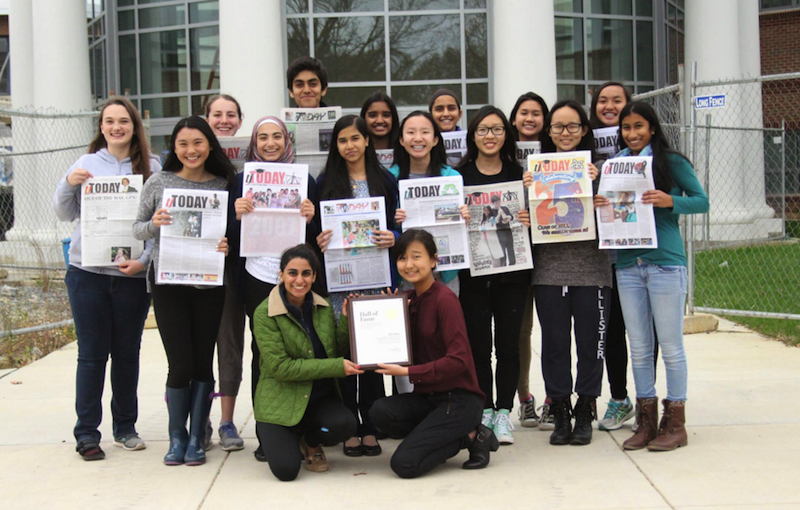 The tjTODAY staff for 2015-16 celebrates induction into the NSPA Hall of Fame.

After receiving its 11th consecutive All-American Award of Distinction last year, tjTODAY was inducted into the National Scholastic Press Association (NSPA) Hall of Fame at the annual scholastic journalism convention on November 15.

As previous editors-in-chief and advisors know all too well, the road to induction wasn’t an easy one. Previous tjTODAY adviser Jennifer Seavey first began submitting tjTODAY for All-American critique in 2004, when it had already qualified for an All-American Award for the first time. From there, it was merely a matter of earning consecutive distinctions that put the publication in consideration for recognition in the Hall of Fame.

“When I first heard that tjTODAY had been inducted, I was already aware we were up for the honor for some time,” Seavey said. “I knew we had qualified, so receiving the award was just a relief at the end of a very long wait.”

As years of All-American distinctions passed by one after the other, many staff members could feel the building anticipation of a potential Hall of Fame induction for the publication.

“I had no idea what the hall of fame was when I joined journalism,” Class of 2014 alumna Shayna Hume, a former Editor-in-Chief for tjTODAY, said. “As I got more involved with the staff, I learned a lot about the competitions we regularly participate in. When I found out about our potential for Hall of Fame recognition, I knew I wanted to help us get there.”

Many of the previous editors who contributed to the paper’s induction still continue to actively participate in journalism through their college publications. Jefferson alumna Carleigh Stiehm currently serves as the Editor-In-Chief of “the Duke Chronicle” at Duke University, and alumna Thrisha Potluri is a managing editor at University of Virginia’s “the Cavalier Daily.”

“I’m still in close touch with almost every one of my editors from all those years. I loved watching them receive writing awards because they were so proud,” Seavey said. “Each year we received a Pacemaker Award was an incredible accomplishment, and I loved sharing that pride with my staff.”

Winning the award not only was a prideful moment for many of the current members on staff and advisers at tjTODAY, but also former staff members and editors. “It’s so wonderful to know that our talented staff and advisers from the past 11 years have been awarded this incredible honor,” Class of 2015 alumna Ellen Kan, a former Editor-In-Chief for tjTODAY, said. “We’ve encountered many challenges, from having a small staff to balancing the print paper with an expanding online presence, and I’m grateful and proud to have been a part of tjTODAY’s long tradition of excellence.”