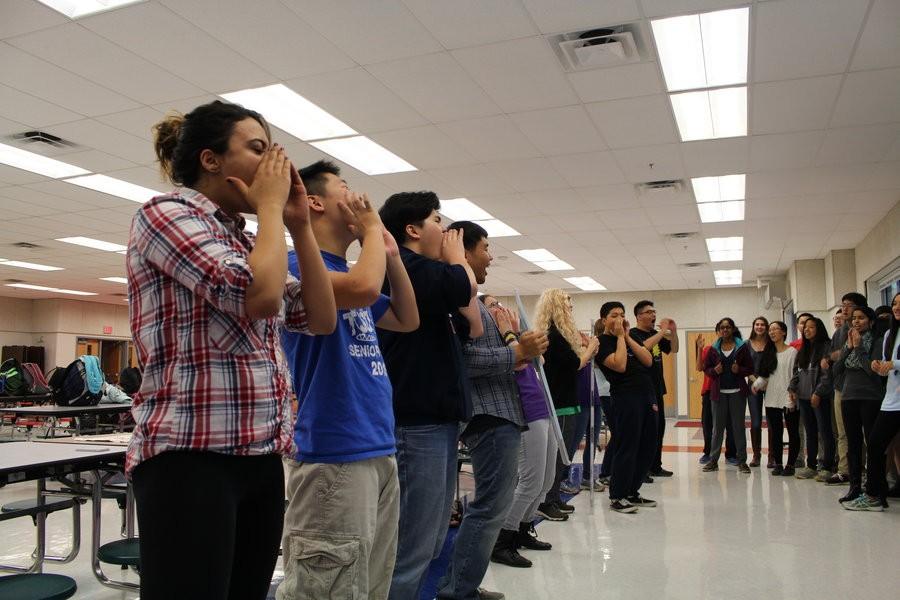 Shouts were heard from the cafeteria during Wednesday eighth periods as spirited Latin students practiced cheers. 91 students from Latin Club are preparing to go to the annual Virginia Junior Classical League (VJCL) convention in Richmond from Nov. 22-23. The convention is a series of contests and events where Latin students from schools across Virginia partake in.

“We have a different cheer every year, and so this time we have to create a cheer, and then we have to teach everybody the new cheer,” said LHS officer senior Ally Scholle.

In addition, all of the convention-goers create a prop together.

“Last year we made a shield and this year we have a spinning sun,” said sophomore Emily Wang.

There are many ways students are preparing for the convention individually, including studying for tests, making art projects, and practicing oratory.

“I’ve been studying mottos for the tests, and I’ve been working on a mosaic to submit,” said Wang.

Besides preparing for the competitive aspects, convention-goers have other activities to look forward to.

“There’s a lot of games that they have, Latin affiliated games, and just normal games people would play, like board games and things like that,” said junior Prathik Naidu. “[The convention center] is a huge, open space where people are selling club T-shirts and they’re selling a bunch of Roman artifacts.”

The convention is also a place for people to spend time with friends and attend assemblies.

“There’s a dinner there which is pretty fun, and then you get to hang out with your friends, and go to all these seminars,” said Wang.

Preparation for the VJCL convention has been proceeding smoothly, with the final eighth period meeting on Nov 20. The LHS officers have planned much of the preparatory events for convention-goers.