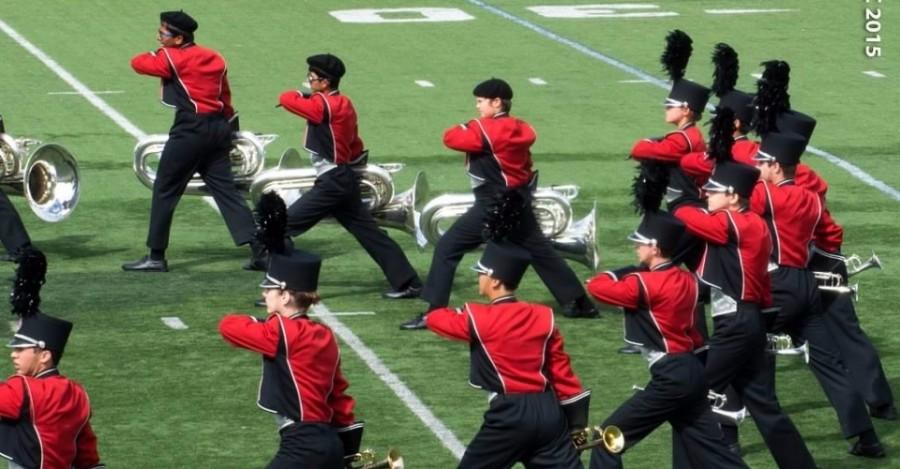 Should a student visit the football field after school during the fall, it wouldn’t be unusual for them to see a large gathering of musicians, wielding trumpets and drums and marching together to the beat. This is TJ Marching Band, and this Saturday, November 7, they  will end their 2015 season with their most important competition yet at the Nationals, in New Jersey. For many members of this fall sport, marching band is a memorable experience, challenging but enjoyable.

“It’s really fun and satisfying after we do well after a football game or a competition,” freshman Sriram Amirneni, a clarinet player, said. “You always need to be pushing yourself and trying to get better and better every rep.”

Band rehearsals are three days a week, with over two hours per practice. During rehearsals, students must practice the skills needed to participate in marching band, from the marching to the music. Practices usually involve fundamentals (practice with marching), followed by visual and music blocks, focused on the aesthetic and musical aspects of the performance. A full ensemble with a run-through of the show is also important, bringing together all the different sections of the band: Horn line, Pit, Battery, and Color Guard. Between weekly rehearsals, summer camps, and the private practice necessary to improve, marching band is a sport that requires no end of dedication.

“Whenever you think you don’t have time, you have to make time,” Amirneni said firmly.

Not a second is to waste. Students in marching band have many things to remember during their rehearsals and performances.

“You have to make sure you are using the right marching technique, and make sure you are in step with the drum major,” sophomore Julia Damron, who plays the piccolo, said. “Breath control is also important, because you have to push air through your instrument while marching, and actually sound good on your instrument without having your sound bounce with your feet, or stopping when you are tired.”

On Saturday, the athletes will be competing at the USBands Nationals at the Giants Stadium in New Jersey along with many others from all over the country.

“Our show this year is titled ‘Assimilate,’” junior Sydney Dayyani said. “It is based off of George Orwell’s novel 1984 and features music by David Gillingham and Shostakovich.”

The band has been practicing for this competition since August, and Dayyani is confident that it was worth the while.

“Marching band does take an insane amount of dedication, focus, and discipline,” she admitted, “But seeing the results of our work in our performances makes it all worth it!”