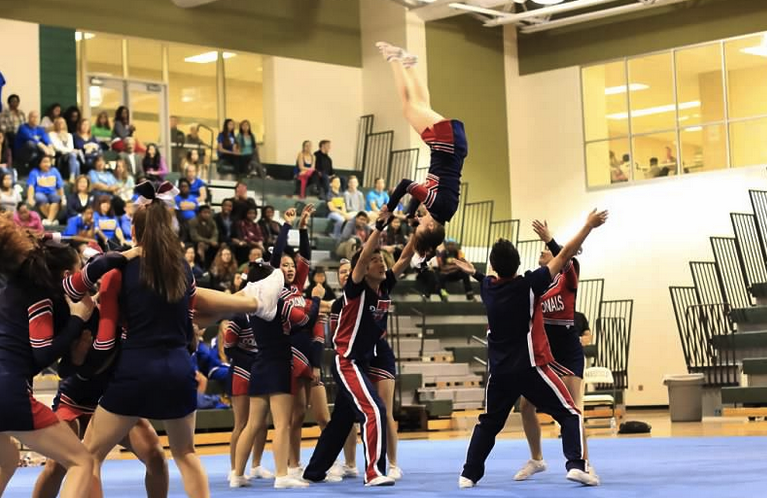 The Jefferson cheer team performs a handstand vault over to pyramid during their routine at the Capitol Conference on Oct. 26

After cheering at football games and performances during the pep rallies, the Jefferson varsity cheer team ended their season at the Capitol Conference Championships.

On Oct. 26, Jefferson’s varsity cheer team competed in their last tournament of the year at Wakefield High School. The team finished with a score of 149, which placed them fourth out of seven teams. In this tournament, the three teams with the highest ratings are able to compete at the regional level. Because the team was one place away from qualifying, their competition season is officially over.

“The competition is where all seven varsity teams in our conference come together to perform a 2:30 to 3 minute routine complete with jump stunts and tumbling, and get scored on it,” senior Rachel Vasta, one of the three captains, said.

Many students hold the misconception that all cheerleaders do is cheer on the sidelines at football games, and while this is one of their responsibilities, most of their practices and training sessions are directed toward competitions.

“In reality, we have six practices a week, and maybe one is dedicated to games,” Vasta said. “We start off the season doing a lot of conditioning and teaching cheers for newcomers. Once we have competition choreography though, that’s 90% of what we work on. Lots of conditioning, trying new stunts, working to get tumbling, practicing jumps and brutally stretching your fliers.”

Several members agreed that although some parts of the routine could’ve been improved with more practice, overall the team performed well.

“There was one step in our cheer that I forgot to do. I was supposed to extend for a hitch, but I was distracted and forgot,” freshman Richard Wang, a first-year member, said. “I felt like Elizabeth’s basket at the end went very high, and we got a good response from the crowd.”

The audience of the event consisted of competitors from other schools and the families of Jefferson’s cheer team. Jefferson’s junior varsity cheer team also attended the competition.

“[The junior varsity team members], of course, were cheering for us,” Wang said. “Hearing them cheer for us was extremely relaxing. It kind of gave me extra power, like what a cheerleader is supposed to do.”

Considering the fact that this championship determines the outcome of the season, the cheerleaders worked in 16 hour practices each week.

“Our coach told us to leave everything on the mat. That may sound really cheesy, but it’s basically what we were thinking,” Wang said. “I wanted to leave with no regrets.”

Once the cheer team’s routine had ended, members focused on other concerns, including in academics.

“To be honest, I was very tired and thinking about all the calculus studying I could be doing,” sophomore Christine Zhao said.

Much has changed throughout the season, and the relationships between the cheerleaders have also evolved alongside them.

“The nature of cheer helps foster such strong relationships,” Vasta said. “Between saving each other from broken bones and concussions on a daily basis, to teaming up when we run a timed mile so that we can encourage each other to keep pushing, to just the concept of us all working together towards one common goal rather than most sports where you worry mostly about your own performance at a game, [cheer] creates a lot of love between us.”

For freshmen, sophomores, and juniors on the team, there is still time for them to show their Jefferson pride in years to come, but the seniors’ performances will be missed.

“Although my incredible senior cheerleaders are going to be gone, I’m excited to see the new group that will be joining us,” Wang said.