Back to the Future day and where we’re going 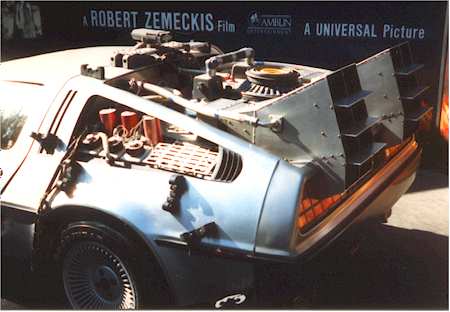 The DeLorean, the car Doc Brown and Marty McFly used in Back to the Future, is above.

“When I first saw it, it was like ‘oh, that could [be] the future’, and [it was also] a classic, so I just fell in love with it,” junior Avinash Tummala said. One of the most appealing parts of the movie may be how the movie predicts the creative inventions society would be using by 2015.

In 1989 when Universal produced the film, people thought cars would fly and roads would be in the sky by now. “Roads…where we’re going, we don’t need roads,” Doc Brown said. Some of the technologies shown in the movie that people thought would be common by now, 26 years after the film premiered, also include self-size-adjusting clothes and controlled weather patterns were. We don’t have flying cars, self-size-adjusting clothes, or controlled weather patterns yet, but some other technology shown in the film already exists, or is coming soon.

One of the technologies already created by inventors that was shown in the movie is a fingerprint scanner that is used as a method for unlocking doors. The Adel Trinity 788 Fingerprint Password Lock is an example of one company’s idea. Fingerprint technology for anything besides unlocking iPhones has not taken off with the general public yet, though.

“I think that’s only two or three years [away], the technology is absolutely here, it’s just not cheap enough for it to be practical for common use,” freshman John Small said.

Another invention producers featured in Back To The Future II is the hoverboard that McFly uses while being chased by the villain Griff and his gang. What some people may be excited to know is that Lexus has invented a hoverboard. It is different from the hoverboard shown in the movie, though. Fans of the hoverboard, like Small, still have to wait for the Lexus Slide to hit the market at a reasonable price.

Another group of issues preventing advancements in technology relate to safety and practicality. Jared Seyler, a Design and Technology teacher, believes that even once flying cars are invented, we would still have to consider what a difficult transition it would be from our normal cars now.

“I think the logistics of having flying cars is a big issue,” Mr. Seyler said. He suggests instead that “autonomous cars could help solve some of [the] problems.”

Back To The Future Part II expected many more advancements in technology in 26 years than actually occurred, but perhaps its fantasy of 2015 isn’t too far away. Mr. Seyler points out that less than 20 years ago, smart phones did not exist, so who knows what will happen in the future?

“In ten years where are we? How big will our phones be? What kind of information [will we] be able to reach? [It’s] going to be fantastic, hopefully,” Mr. Seyler says.