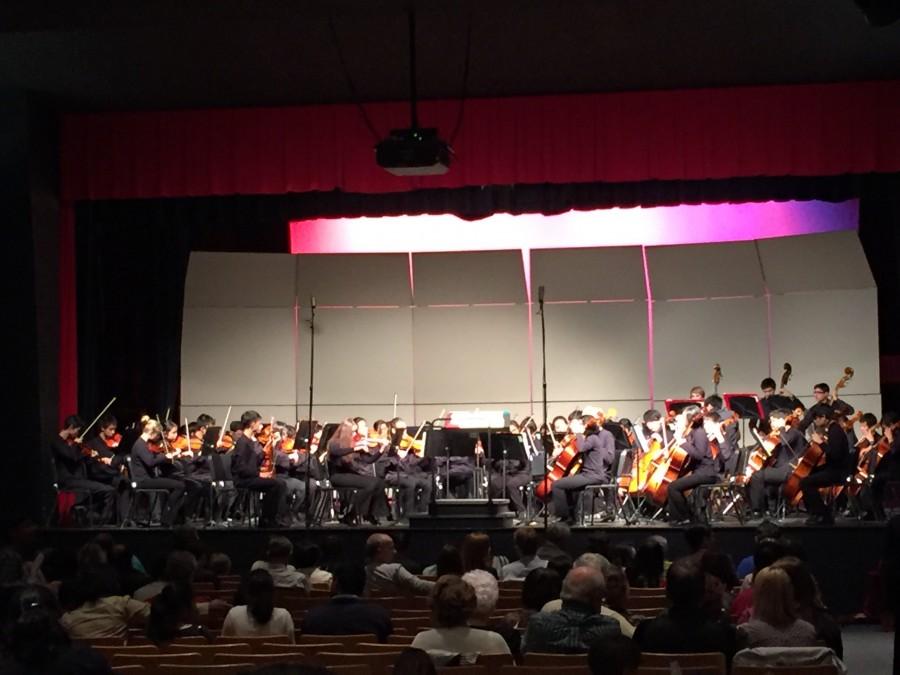 On Oct. 16, the Philharmonia and Symphonic orchestras performed their annual fall concert, bringing various musical tunes and masterworks to the audience under the guidance of the orchestra director, Allison Bailey.

The Philharmonia performed Allegro Assai from “Sinfonia in D Major, Op. 18, No. 1” by Johann Christian Bach, Mike Forbes’s “Dance of the Trolls” and themes from “Romeo and Juliet” by Pyotr Tchaikovsky.

“Sinfonia in D Major, Op. 18, No. 1” opened the performance in a clean, light-hearted way, with hints of Baroque style acting as a fresh introduction to the more dramatic and heavy works ahead. “Dance of the Trolls,” as predicted by the title, was a highly entertaining piece. The eerie sounds of the strings and the frequent pizzicato (technical term that refers to the plucking of the string) seemed to refer to the upcoming Halloween season.

If the first two works put more emphasis on technical skill, Philharmonia’s final piece, “Romeo and Juliet” by Tchaikovsky, was one that also demanded emotional delivery. A masterpiece by Tchaikovsky, in which he found inspiration from Shakespeare’s play of the same title, was one that I personally was anticipating to listen to. The orchestra successfully conveyed the dramatic, grand and seemingly dark atmosphere of the piece, musically narrating the tragedy of the two star-crossed lovers.

The Symphonic orchestra continued the lingering sentiments of Tchaikovsky through their performances of “Overture in C Minor” by Franz Schubert, “Andantino from String Quartet, Op.10” by Claude Debussy and “American Sketches” by Joshua Reznicow.

Schubert, whose pieces reside between the Classical and Romantic eras, was a fitting start for the orchestra. The performance presented a clear balance of emotional restraint and skill, which helped in following the flow of the piece. The emotional intensity heightened during Debussy’s “Andantino from String Quartet, Op.10,” in which its elegant, smooth sounds culminated the orchestra’s skill in technique and art.

The final piece of the program was “American Sketches” by Rezincow. The piece started auspiciously with the fast-paced sounds of the violins, and the feel of enthusiasm continued throughout the performance. With hints of patriotism, the piece seemed truly “American,” serving as a dramatic and grand ending for the hour-long performance.

Featuring a wide range of musical pieces, the orchestra’s fall concert was a delightful and relaxing ride, providing a moment of appreciation and recognition of music that is rarely featured in today’s mainstream and pop culture.