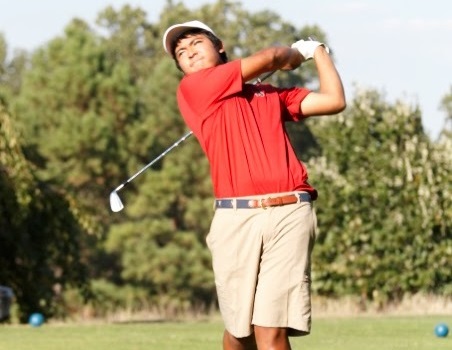 Jefferson’s golf team has had an undefeated streak this year, having won all six of their games this season since August. The team continued this record by winning the conference tournament from Sept. 28 to Sept. 29, and after winning the Virginia 5A-North Regional Championship at Brambleton Golf Club on Oct. 7, the team then became the runner-up in the Virginia High School League (VHSL) Virginia 5A State Championship at the Magnolia Green Golf Club from Oct. 12 to Oct. 13.

“During the first playoff hole [in the regional championship], I made a birdie, Christine Wang, Millen Anand, and Min Kang all made pars, and we won the playoff by three shots to clinch the 5A North Region title,” senior Nathan Chuwait, member of the Jefferson Co-Ed Golf Team, said.

Earning the title as runner-up is the highest the Jefferson team has ever placed in their state competitions. Sophomore Min Kang, juniors Christine Wang and Chris Cao, and seniors Millen Anand, Albert Zeng, and Chuwait are all members of the Jefferson Co-Ed Golf Team, and they all took part in the conference, regional, and state competitions that ended the golf team’s season this year. With a score of 640 in the conference competition, 310 in regionals, and a 627 in states (which consisted of their score of 318 from the first round in the tournament and their score of 309 in the second round), the golf team was able to play hard and rank in the top positions among their competitors.

“We left everything out there on the golf course,” Kang said. “We gave every effort to contribute the best scores we could on the team. There may have been a couple of bad holes out there, but I am proud to say that all of us represented TJ at those tournaments with pride.”

Chuwait did exceptionally well during these competitions. Specifically, Chuwait received a score of 146 at the conference tournament (the best out of all Jefferson scores), won the Individual title at the Regional competition, and won the Individual title at the state competition by eight shots. Furthermore, during the regional competition, his 4-under par 68 shot allowed the team to tie with the North Stafford team, and later defeat them with the help of the scores of the other golfers on the Jefferson team.

“I am very proud of how our team has played this season and I am so happy to be able to conclude my high school golf career on a high note for both my individual performance and our team’s success,” Chuwait said.

Team members are proud of how they did during the season this school year, with their scores from games this season ranging anywhere from 27 strokes to 41 strokes fewer than that of their competitors. However, members of the golf team still understand that even with an undefeated record that resulted from countless hours of practice even when school practices weren’t held and much team support, there are ways to improve and do even better next season.

“We could definitely think about how to recruit more players for the next season,” Kang said. “It would also be nice to hold more practices and sign up for more expedition matches. The expedition matches are a great way to build up tournament experience in our team and try out new lineups.”