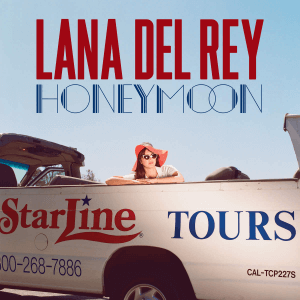 Lana Del Rey fans have been itching for the release of the full “Honeymoon” album since the August teaser was leaked of “High by the Beach,” which made it onto the Billboard Hot 100 and remained there for three weeks. Although I was not personally a fan of “High by the Beach” due to its blatantly vulgar meaning, it still left me looking forward to the full album, which is why I was left feeling disappointed after its release on Sep. 18.

The ominous songs in Del Rey’s first album, “Born to Die,” skyrocketed her popularity in 2012 when they first came out. Fans were intrigued by her almost monotonous voice and low, dark tones. There was a sense of mystery in her deep, mezzo-soprano voice. My personal favorite from “Born to Die” was “Radio,” which was more upbeat and fast-paced than her normal songs, and was accompanied by a snare drum. Even though most of her songs were slow, I never felt like her “Born to Die” songs were droning, but rather a nice change from the typical upbeat pop music played on the radio.

Del Rey found somewhat of a new sound, while still keeping her same style when she released “Ultraviolence” two years later. The album featured many slow songs such as “Brooklyn Baby” and “West Coast,” but still featured the same Lana Del Rey that fans grew to love. A noticeable trend with each new album was the addition of darkness to the lyrics and music, which was definitely recognized in “Honeymoon.”

“Honeymoon” features some of Del Rey’s most heart-wrenching songs, but also some of her most shallow. While blatantly or subtly talking about drugs in many of her songs, she still covers some more serious ground talking about loss, sorrow, love, and life.

On musical appeal alone, “Honeymoon” and “Music To Watch Boys To” were the two standouts. “Music To Watch Boys To” reminded me of the classic “Born to Die” Lana, which was reminiscent of her raspy undertones and beautiful melodies. “Honeymoon” took a darker direction, but the song proved itself with its powerful lyrics and pitch-perfect harmonies.

As the album progressed, the song quality took a turn. Many of the songs sounded like recycled versions of old songs, including “Art Deco” and “Religion.” The songs seemed to lack uniqueness and the album overall failed to surpass her former.