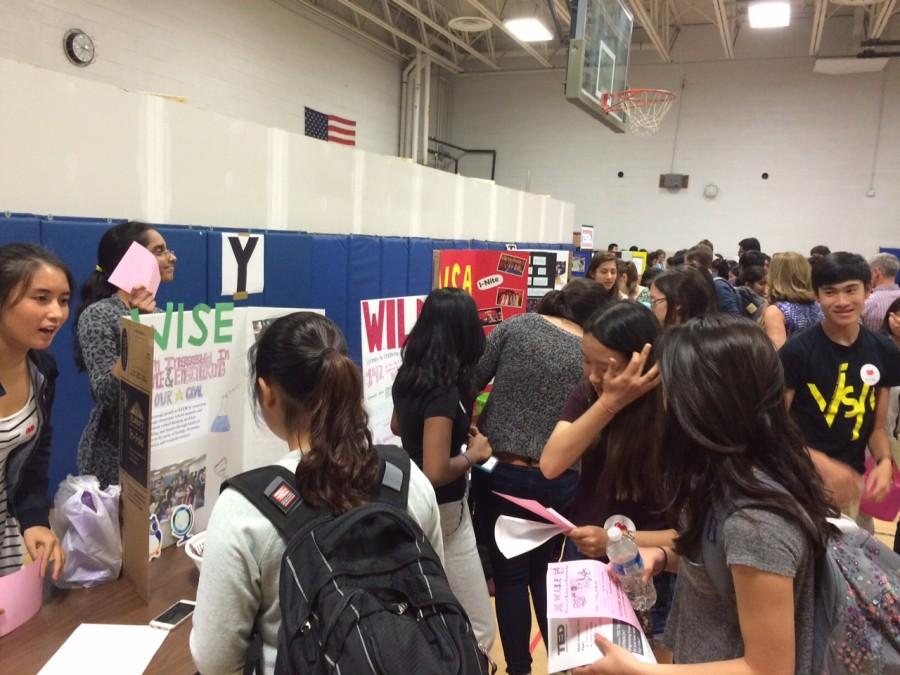 Representatives at club booths in Gym 2 talk with new students about the many activities Jefferson has to offer.

On Sept 23, various clubs at Jefferson took part in the school’s annual Activities Fair. The Activities Fair, held before the start of eighth periods at Jefferson, gives freshmen and “froshmores” (students who begin attending Jefferson in sophomore, not freshman, year) an opportunity to hear and learn about a few of the over 180 clubs that are a part of the Jefferson community. The event also helps students discover more ways to become involved in the school community that they may not have otherwise heard about.

“I remember when I was a freshman, I was sort of overwhelmed with information but then I got to see what all the clubs were about,” sophomore Mara Casebeer, Treasurer for the club “Science and Law” and one of the representatives for the club’s booth at the Activities Fair, said. “If you go to the Activities Fair, you only really get a little snippet of the clubs, but it’s a really good introduction to them.”

On the day of the Activities Fair, representatives of club booths were able to set up in Gym 2 before homeroom. During B Block in eighth period, freshman and froshmores were then able to go to Gym 2 and talk to students who were a part of clubs such as Teknos, Science Olympiad, Bioengineering Projects for the Future (BPF), and Future Business Leaders of America (FBLA). This exposure to the variety of clubs Jefferson has to offer gave students the chance to ask questions about clubs they may have previously heard about, and allowed them to learn about new clubs they may want to join later this year.

“I am excited for TSA [Technology Student Association] and TJMUN [TJ Model United Nations],” froshmore Liem Budzien said. “I have participated in TSA in middle and at my base high school. I have had no previous experience with MUN, but after looking at their poster I decided to sign up.”

Besides becoming more aware of the clubs at the school, the new students also saw that Jefferson provided them with opportunities that aren’t as common in other high schools. They were able to explore clubs that catered to many interests, and the booths in the event helped show that there is something every student can get involved in at Jefferson.

“Everybody has a chance to do activities that they’re really interested in, including stuff that they don’t have the chance to do in their base school,” freshman Sophia Wang said.

Clubs at Jefferson will be holding interest meetings during the upcoming eighth periods so students can have a better understanding of clubs they may have seen at the Activities Fair. Overall, not only was the Activities Fair a way for students to become more educated about Jefferson’s eighth periods before they began, but it allowed clubs to spread their missions and goals, and further represent the diversity and opportunities present in Jefferson.

“I really wanted to get a lot of the newer students at TJ at least interested in exploring what types of debate we offer at Thomas Jefferson,” senior Jeffrey Xia, one of the representatives for the “Public Forum Debate Team” booth, said. “But one of the important things for me is to just get the information out there that students have these opportunities, because if they aren’t even aware of these activities they can’t take advantage of them. Eighth period is one of TJ’s pride and joys and I think that more than anything else, we are ready to share that with our new additions.”