“Doctor Who” season premiere sets the stage for another spellbinding season 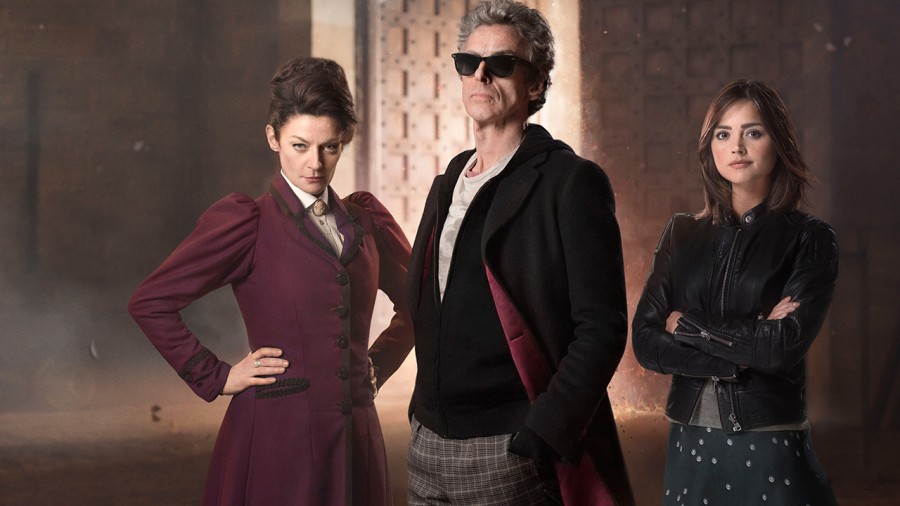 The season premiere of "Doctor Who" aired on September 19 via BBC America.

On Sept. 19, the ninth season of “Doctor Who” soared back onto the air with its season premiere, “The Magician’s Apprentice.”  The upcoming season will again feature the Twelfth Doctor (Peter Capaldi) traveling time and space with his companion, schoolteacher Clara Oswald (Jenna Coleman).  The premiere didn’t disappoint, laying the groundwork for the season arc almost immediately and building up suspense for the second part of the premiere that will air next week.

When Earth’s skies are frozen in time, Clara and the Unified Intelligence Taskforce (UNIT) reunite to search for the Doctor.  But in Earth’s hour of need, the Time Lord has mysteriously vanished.  The plot thickens even further when UNIT picks up on a cryptic message from Missy (Michelle Gomez), the Doctor’s rival-turned-friend, saying that she has received the Doctor’s confession dial – an object that is only delivered on the eve of the Doctor’s final day.  Clara and Missy form an unlikely alliance to try and find the Doctor, but they aren’t the only ones searching.

This season is Clara’s last with the Doctor.  On Sept. 18, Jenna Coleman confirmed that she has quit the show and filmed her final episodes after landing the lead role as Queen Victoria in an ITV drama series.  Although it is not yet clear whether Clara will exit in the middle of the season or in the season finale, she will certainly be missed.  Clara’s evolution through her years on the show, from her adventures as the Impossible Girl with the Eleventh Doctor to her banter with the Twelfth, has been thrilling to witness and it is difficult to imagine anyone else sharing the TARDIS with Capaldi.

Michelle Gomez’s return as Missy in season nine was unprecedented, as her character was believed dead after she crossed paths with the Doctor in season eight.  However, Gomez brought her refreshing and amusing personality to the Time Lady again in the premiere, further developing her relationship with the Doctor.  Missy, otherwise known as “The Mistress,” is the only other living member of the Doctor’s race, and the Doctor’s confession dial is delivered to her, denoting her as his closest friend.  Even though the Doctor and the Master have fought against each other a thousand times over, the root of their relationship is a companionship that has spanned countless wars and regenerations.

Although the pacing of the premiere was slower than usual, with major plot events picking up only halfway into the episode, “The Magician’s Apprentice” seamlessly drew fans back into the Whoniverse, building tension as Clara, Missy, and UNIT search for the Doctor.  The premiere episode is also part of a two-episode arc, and there are many loose ends that will be tied up in “The Witch’s Familiar,” the second part of the story.

“The Magician’s Apprentice” kept audiences transfixed and desperate for the next episode.  “Doctor Who” constantly pushes the boundaries of television and science fiction with its multidimensional approach to its characters and its universe, making it all too evident why it has captivated Whovians for over 50 years.