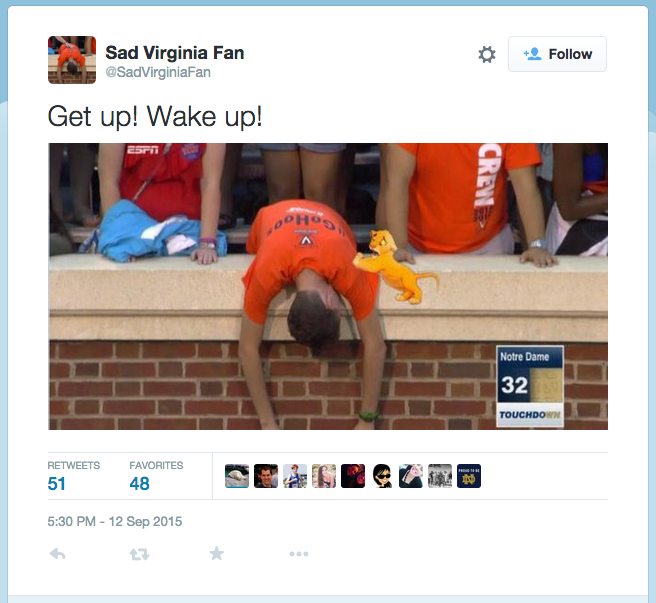 On Sept. 12, the Graphics Interchange Format (GIF) of a University of Virginia (UVa) football fan’s reaction to the score determining 39-yard touchdown performed by competitor Notre Dame went viral. In the final seconds of the game, the Virginia Cavaliers lost 27-34 to the Notre Dame Fighting Irish. Michael Bunting, a 2012 TJ graduate currently studying computer science at UVa, was the disappointed fan featured in the two second GIF.

“I think I nailed [the pose] perfectly. The best part is that it wasn’t even staged, either,” Bunting said. “When the catch [preceding the final touchdown from the Fighting Irish] was made, I just let my body go limp—ragdolled, if you will—and my upper body slid over the ledge.”

In the clip, Bunting’s nursing student friend Maggie is on his right, steadily patting him on the back. On his other side, religious studies and government major Dagoberto stands with his arms straight out in front of him, braced by the ledge.

This moment was a highlight on Twitter and sports websites hours after being broadcasted by ESPN around 7:00 p.m.

“Since the cell and data reception in the stadium is akin to that of TJ’s during a sold-out hackathon, my phone didn’t receive any of the two dozen messages my friends and family had sent me until around 7:10 p.m.,” Bunting said. “I must have not looked at any of them until I returned to my house around 7:20 p.m., which was when three girls who live across the street from me ran up to where I was sitting on my front porch and screamed, ‘Mike! Mike! You might be famous!’”

Bunting initially did not believe that he was trending, as his friends constantly like to pull pranks and have a high ability in using Photoshop to alter images. However, he was convinced after watching a replay of the final touchdown on ESPN.

“My reaction turned from disbelief to well, at least my face is hidden so I can’t be stalked, so I have that going for me, which is nice,” Bunting said. “While the image has been circulated virally on the Internet, not a single person on [school] grounds has recognized me yet who hadn’t already previously known me. Quite literally the anonymous celebrity of my school.”

An avid supporter of UVa’s wahoos, Bunting has attended most of the home games to support their players. He had also found time to watch Jefferson football games during his years at the school.

“The gates to Scott Stadium [at UVa] open 90 minutes before kick-off, and usually [me and] my friends will get there right when they open to secure front-row seats in the student section,” Bunting said. “There is something inherent within the nature of cheering on your school’s team with your friends that strengthens the bond of your friendship with them.”