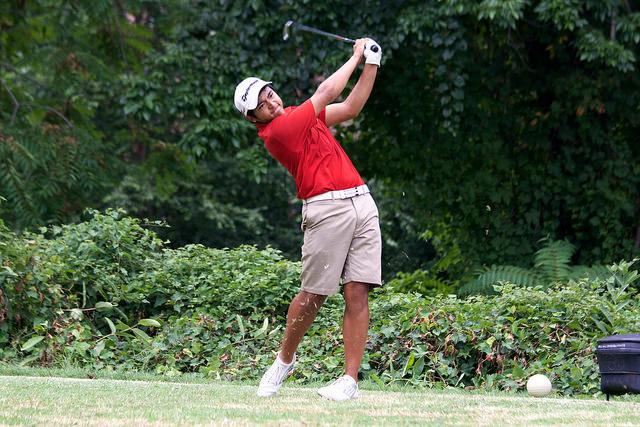 Four times this season, the golf team walked onto the familiar greens of Pinecrest Golf Course for a match, and all four times they emerged victorious. Walking past Pinecrest, all one might see through the hedges is a group of geese intimidating a few elderly golfers, but Pinecrest is also the home of Jefferson’s undefeated golf team.

“Since we’ve played at Pinecrest so often, we have an advantage over teams who haven’t played there at all, or maybe have played there once or twice,” junior Chris Cao said.

Jefferson’s team plays in team play, where the match score is the sum of the four best player scores. They send six players to every match, each of whom play the full eighteen holes. The lineup of players is determined by who performed particularly well at preceding practices.

“Our season really strong,” senior Nathan Chuwait said. “To defend our title and make it back to states would be awesome as a team.”

Because of the nature of golf, consistent wins don’t mean the team is unchallenged.

“It’s a sport that is not only played against yourself, but against the course and your opponent,” Head Coach John Myers said.

With the season coming to a close, Jefferson’s golf team’s looks forward to senior night this Thursday, September 17, along with conference the week after, and regionals and states in October for qualifying players.

“I’m really looking forward to senior night because I think our team has come such a long way and I’m excited for the celebration of my final year on the team,” Chuwait said. “After playing in senior night my last three years here, it will definitely be really cool to finally experience it as a senior.”