Off the Beaten Track: London 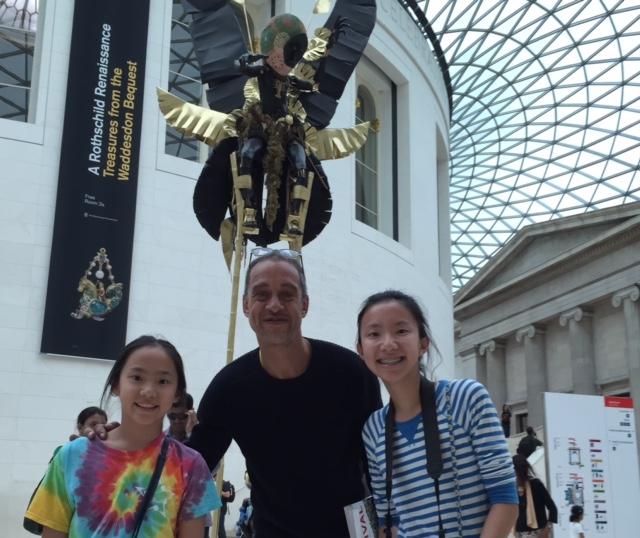 On August 11, artist Zak Ove was filming for a documentary at the British Museum about the sculptures he created.

“Look, the driver’s seat is on the right!” my sister Michelle said as we got into an Uber taxi headed for our London hotel. Of course I had heard about this multiple times, but seeing this little switch-up caught me by surprise.

As the eager travelers we are, my sister and I had planned out a list of 15 attractions we wanted to visit. From Westminster Abbey to Oxford University, Buckingham Palace to the London Eye, between much of our journeying was rushing to catch the next metro in addition to arriving back at our hotel past midnight. On the fourth and last night, I was sprawled on our hotel bed trying to rest my swollen feet, but I was feeling accomplished. We had visited all of the locations that were planned.

However, thinking back, all of my favorite memories were not planned; they caught me by surprise. Coincidental — that’s how I would describe the aspects I love most about my trip to London. Here are three of my favorites:

1. We decided to leave Oxford University an hour earlier to have time to head back to the British Museum. Knowing that time would be limited, I decided to take pictures with anything I would be able to see, anything I thought was unique. As we entered the complex, two black-and-gold sculptures greeted us, both holding similar characteristics in style and medium but portraying two different actions. Each sculpture showed a young African American balancing on two bamboo poles at about eight feet high, with cultural additions to the bodies including wing-like structures and a skirt made of wire. What caught my eye was African American cultural ties with the details of the sculptures, and the delicate balance of each human in the air even with heavy portions attached to the sculpture. The artist’s inspiration for his work was the Trinidad carnival, and being able to experience African culture. My dad asked a man who was walking past to take a picture for our family with the sculpture, to which the man’s companion chuckled and said, “He’s the artist. This, this is his work.” His name was Zak Ove, and having our picture taken by “the artist”, in front of his own creation while not even knowing it was him, felt special. What are the chances that we would be standing near Zak Ove’s sculptures, and catch him walking past on a Tuesday evening right before the museum was about to close?

2. Queen’s Theatre has been showing Les Miserables for the last 30 years, identifying themselves as having the longest running showing of the play. Located on the corner between two crossing streets, inside it is a classic, tiered theater with red velvet curtains. Actors and actresses included Peter Lockyer, Jeremy Secomb, and Rachelle Ann Go, who weaved together a passionate, gritty and witty rendition of Victor Hugo’s writing. (It was emotional to the point where my mom cried.) Classic songs were vocally exact, and the audience was completely silent throughout the entire performance.

3. Strolling past Trafalgar Square, we ran into the London Korean Festival. Hundreds of people had stopped by to watch the fashion show, with models strutting down the runway in dresses inspired by Korean style and culture. The outdoor show was a highlight because it reminded me how culturally diverse London is.