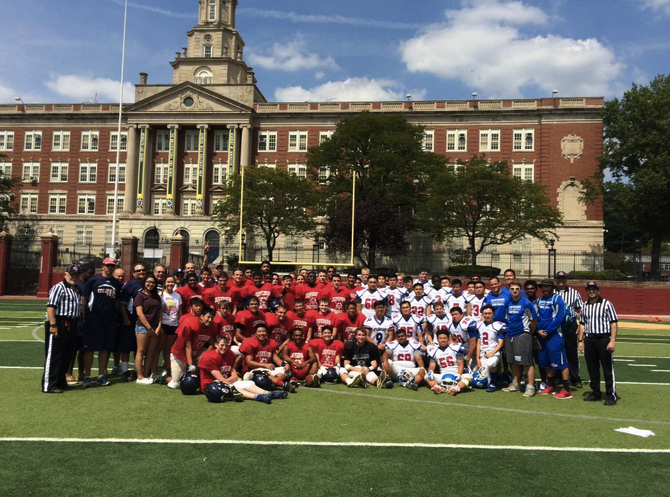 The team faced both Stuvyesant high school and Franklin K. Lane high school in scrimmages on August 29, defeating both schools in a shut-out victory.

On the morning of August 28, 41 members of the Colonial football team prepared to travel further than usual for their first game of the season— four hours by bus to Brooklyn, New York.

The team faced two Science, Technology, Engineering and Math (STEM) oriented schools in scrimmage-style games while visiting the city, winning both. In the first game against Stuvyesant High School, the final score was 35-0 in Colonial victory. The second game against Franklin K. Lane resulted in a score of 7-0.

“The best part of the game for me was the first play of the scrimmage,” senior Edward Zhou, an offensive and defensive lineman on the Colonial team, said. “We lined up against Stuvyesant’s Nose Tackle and moved him back.”

On the cruise tour, the Colonials were able to see many of New York City’s iconic sights, including the Statue of Liberty, Brooklyn Bridge and World Trade buildings.

Next week, the team will be back at home for the first recorded game of the season. The Colonials will face the T.C. Williams’ Titans at Jefferson on September 4.

“I want to focus on keeping Nick Lemanski, our quarterback, upright and giving him more time to throw,” senior Joseph Chetupuzha, an offensive and defensive lineman on the team, said. “We’re determined to keep our shut-out streak alive.”