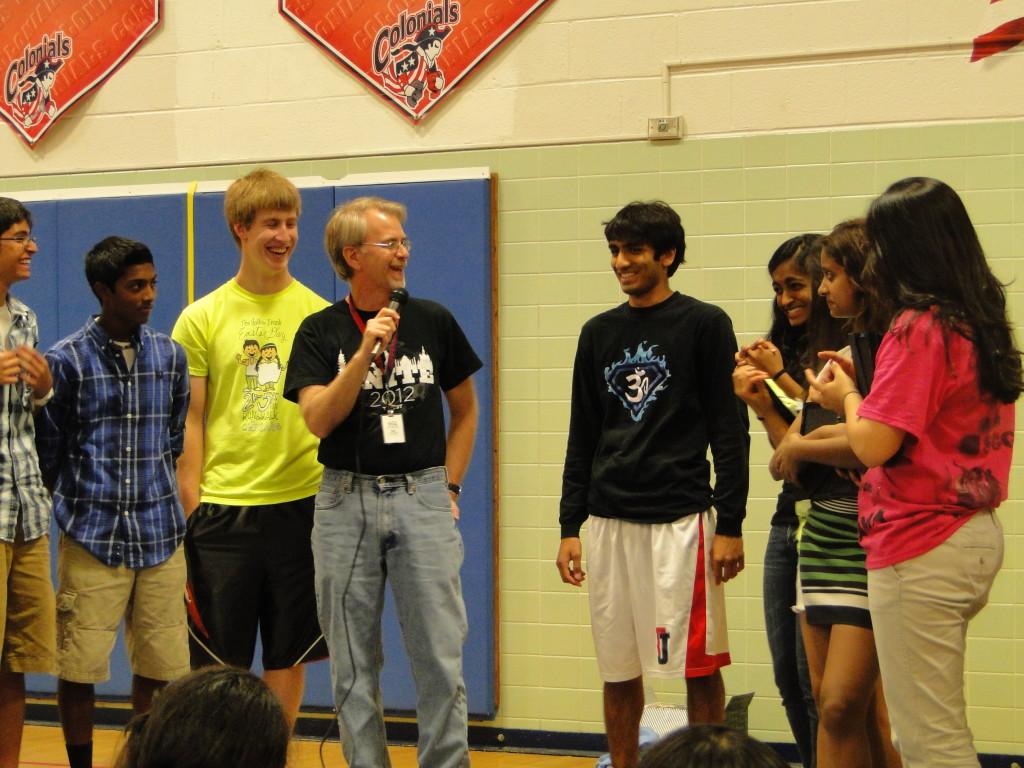 During Friday B Blocks, the gym is usually filled with Bollywood music and Namaste members practicing Bhangara dances. For Namaste’s last meeting, though, the scene looked a little different. The class officers and alumni stood, microphone in hand, reminiscing about the time and effort their sponsor dedicated to their club.

English teacher Roger Green is retiring this year after working at Jefferson since the Governor’s School opened in 1985 and sponsoring the Namaste club for 11. To honor the time he dedicated to Jefferson and Namaste in particular, the club officers decided to throw him a surprise party on Friday.

The officers created a Facebook event, inviting students and alumni alike. They also coordinated food and presented him with some gifts to show their appreciation, including cards, a T-shirt, a collage of photos  and a globe with his name engraved on it.

“Anytime we’d ask about a meeting, he was so willing to do it,” said Namaste president Pranava Raparla. “He was open to every idea we had and willing to let us take charge.”

In addition to the Namaste members, a number of alumni and some of Green’s English students also came to the party. Despite the large turnout, no one spilled the secret. Even with crowds huddling around thank you cards and food sitting on the table, Green was completely surprised they were dedicating a meeting to him.

Though the officers and alumni thanked him immensely for his dedication to the club, Green insisted that Namaste’s success came from the students’ hard word rather than his.

“I think what I’ll miss the most is working with the officers and watching them work,” said Green, “because that’s what I did most of the time.”

The officers and alumni, however, explained how Green had always been there to help. Namaste takes on the responsibility of I-Nite every year, and Green helped the treasurers take care of purchase orders and get enough tickets for the students and their families.

After the short speeches, lots of applause, and a group photo, the students, alumni and teachers enjoyed the food while they spent some last moments with Green.

“We’ve been planning this for a couple of weeks,” Raparla said. “We wanted to give something to Mr. Green that he could always look back on.”