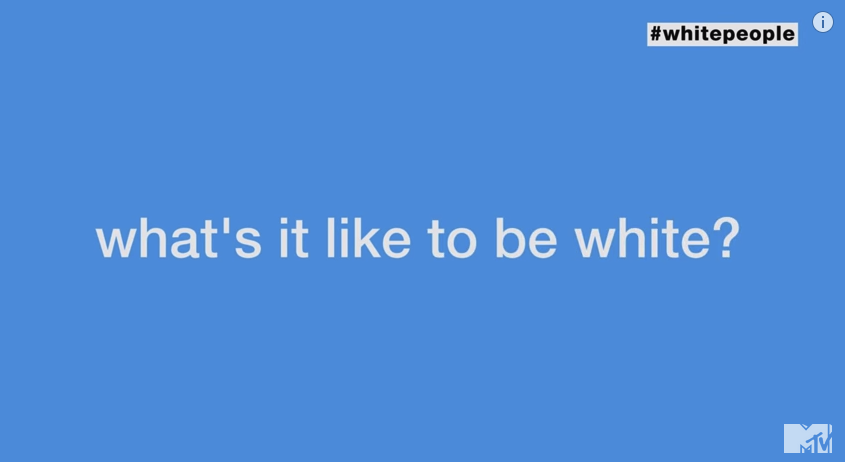 MTV's "White People" is a documentary launched on July 22 in partnership with organizations "Look Different" and "Define American." These organizations aim to spark discussion about race in the modern setting.

The documentary was released on July 22, a mere week after Civil Rights Activist Sandra Bland was found dead following her controversial arrest by a white police officer in Waller County, Texas; a story that erupted over social media in demand for justice and a check on “white privileges” in the United States today.

Long overdue, “White People” openly discusses the uncomfortable topic of race in many aspects, touching upon white privilege, color blindness, and education. The documentary itself featured interviews from several young, white youths from across the country about what being white in America is truly like for this generation.

Pulitzer Prize-winning journalist and filmmaker Jose Antonio Vargas, an undocumented immigrant from the Philippines, conducted the interviews and led discussion with thought-provoking questions regarding the relationship between people of different races in a modern setting.

Among the dozens of interviews conducted, the documentary focused on Dakota Wright, a psychology major from Winston-Salem State University–a historically Black university, Samantha Slavinsky, a second-grade teacher at Crazy Horse School on the Lakota Reservation in Wanblee, South Dakota, Katy, a honor roll student who feels as though she had received unfair discrimination being white in regards to scholarship money, Lucas, who teaches a white privilege workshop, and John, who lives in Brooklyn, New York, and has recently seen an influx of Asian immigrants in his area.

Vargas made the point during his interview with Katy that many white high school students feel that they are put at a disadvantage in terms of searching for scholarships at the college level, due to the number of grants only available for people of color. However, in the United States today, nearly 96 percent of all undergraduate scholarships are available to whites, who are 40 percent more likely to receive said scholarships than the latter group.

In addition, 62 percent of undergraduate students are white, and those students receive approximately 69 percent of scholarships. On the other hand, minority students make up 38 percent of all undergraduates, and only receive 31 percent. “White People” addressed some possibilities for the common misconception as to why this could be, also touching on why “reverse racism” cannot exist in today’s society.

When Vargas asked a group of white volunteers “how do you feel talking to a person of a different race?”, almost everyone in the room agreed that they did not care nor did they see color. Researcher David Binder found that almost three in four white people claim they do not differentiate races, known as racial colorblindness. The non-white volunteers then went on to claim that white people who say they are “colorblind” are just trying to avoid the real issues surrounding race.

Although “White People” is a start for creating a more open discussion about current racial tensions, it does not instantly solve the problems that many people of color face on a day-to-day basis. The documentary was primarily interview and discussion based, allowing for white youths to share their opinions on the world around them. Even so, at moments in the documentary it seemed that Vargas was asking questions just to probe at answers that he could dispute using statistics or a colored perspective. While the documentary may not be the groundbreaking solution to prompt a better understanding of white privilege, it certainly reached its target audience as intended by MTV.

What made the documentary stand out was its emphasis not on placing blame towards whites for the way things are today, but rather on whites taking action to make the situation better for tomorrow.

The full-length documentary as released by MTV can be found here.