“Inside Out” surpasses expectations 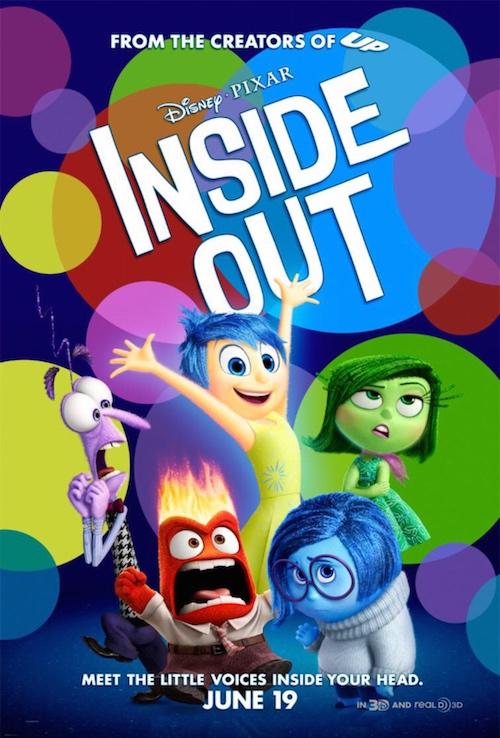 “Meet the little voices inside your head.”

After months of anticipation, “Inside Out” released in theaters on June 19,  to eagerly awaiting audiences.  Though the plot was slightly predictable, the movie did not disappoint, featuring instantly lovable characters, a creative and compelling world and a heartwarming plot.

“Inside Out” follows eleven-year-old Riley (Kaitlyn Dias), who is moving across the country and experiencing a variety of changes in her life.  With her are Riley’s emotions, Joy (Amy Poehler), Sadness (Phyllis Smith), Fear (Bill Hader), Disgust (Mindy Kaling) and Anger (Lewis Black), who work together to manage the “control panel” that decides whether her day is a good or a bad one. The emotions help manage Riley’s memories, which appear as glowing orbs colored differently by the mood of each memory. Riley’s core memories help define certain aspects of her personality and are depicted as “personality islands” in her mind. When Joy and Sadness are accidentally transported out of headquarters and into Riley’s long term memory, they must find their way back while Disgust, Fear, and Anger struggle to keep Riley’s emotions in check.  Along the way, the movie communicates a powerful message: there’s joy and sadness in every memory, and it is okay to have a blend of all emotions.

One of the key aspects of this movie was the development of the world inside Riley’s brain. In headquarters, the emotions control how Riley feels, but the movie also explores Riley’s imagination and dreams, both of which are individual locations in Riley’s mind.

One of my favorite additions to the movie was Riley’s imaginary friend, Bing Bong (Richard Kind), who wanders through long-term memory now that Riley has no need for him.  Bing Bong misses Riley and assists Joy and Sadness on their journey in hopes that he will find his way back to the headquarters so that he can play with Riley again. Bing Bong’s character definitely resonated with me because everyone has played pretend or has had an imaginary friend at some point, and it was interesting to see a visual representation of what happens when we grow up.

The dynamic between Joy and Sadness was another strong facet of the movie.  At the beginning of the film, Joy views Sadness as a purely negative part of Riley’s emotions and memories.  In an attempt to keep Riley happy, Joy tells Sadness to stay away from the control panel and from all of Riley’s memories.  However, as Joy and Sadness journey through Riley’s mind, Joy realizes that all happiness comes with sadness and that, sometimes, it’s okay to be sad. Often, the saddest memories can even be followed by some of the happiest ones.

By the end of the movie, Joy and Sadness are able to reach a balance, and Riley’s story reaches a bittersweet resolution with all emotions included.  Despite the complexity of the world inside of Riley, the movie seamlessly integrates Joy and Sadness’ journey back to the headquarters with the events of Riley’s life, and the events of both storylines never felt confusing or incomprehensible.

“Inside Out” appeals to all age groups with its unique approach to describing emotion.  Younger viewers can appreciate the colorful appearance of Riley’s mind and the lovable emotions. Older viewers can identify with the subtle additions to the world, such as “Abstract Thought” and “The Subconscious”.   Overall, the movie is sure to resonate with audiences of all ages – because after all, at some point in time, we’ve all felt mixed emotions.