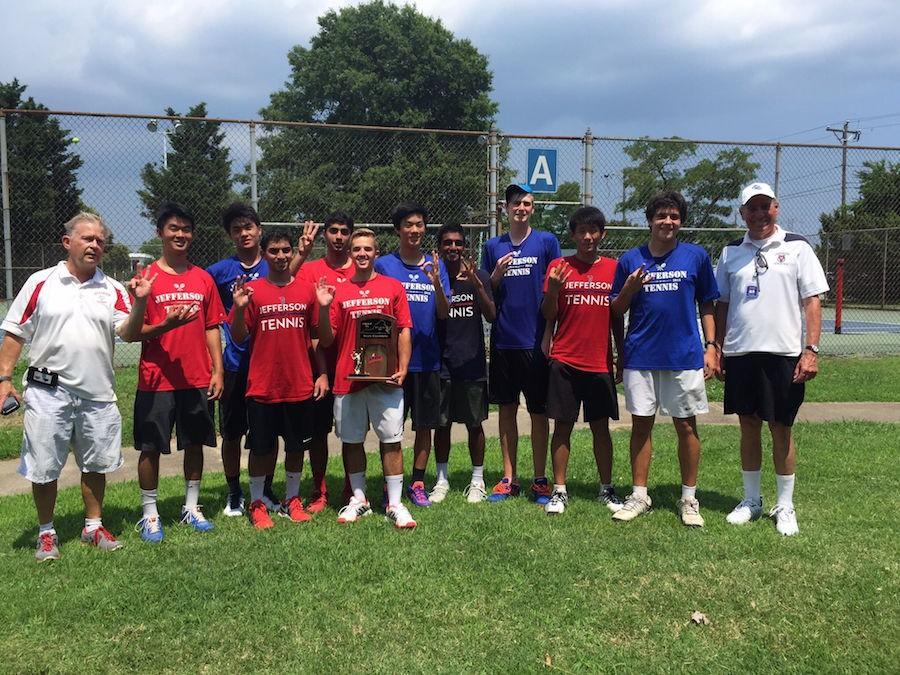 The boys tennis team won states for the third time in a row after beating Deep Run High School in Newport News, Va.

After completing the regular season with a perfect record of 17-0, the Jefferson boys tennis team finished the year with cinching the states win for the third year in a row. On June 13, the team won finals against Deep Run High School at Huntington Park in Newport News, Va., beating the school by 5-2.

“This season was great; we kept our focus up from last year and all of our players were strong on the ladder,” sophomore Arun Singh said. “We all fought and practiced hard to keep each other sharp for our matches, and it payed off in the end with a perfect season.”

With these accomplishments, the members of the team were proud to continue their success from last year.

“I felt really great coming into this season because we only lost one starting senior last year so we still had a really strong team,” senior Justin Sun said.

As a remaining underclassman, Singh hopes to win states again.

“Everyone that is on the team is very committed to the sport, and we all know what it will take to bring another championship back to TJ,” Singh said. “We’re all going to work harder in the offseason so that we can reproduce these results next year.”

However, the seniors departing for college will miss the camaraderie and memories they have made and wish that the team continues to succeed.

“Next year, it’s always nice to hope for four state championships in a row,” Sun said. “I’m going to miss the tight bonds we formed as a team, but I am confident that under the leadership of the coaches and new captains, the team will continue to succeed.”