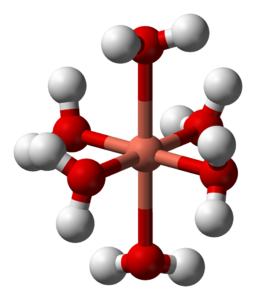 Hexaaquacopper(II) complex is a molecule that has been tetragonally distorted by the Jahn-Teller Effect, as can be seen in its ball and stick model.

In most chemistry classes today, the curriculum regarding states of matter includes solid, liquid, gas, and maybe plasma. However, there are actually several other states of matter that do not fall under these simple categories. What about Fermionic condensates? The Quantum Hall state? Degenerate matter?

Scientists around the world have recently announced the discovery of a new state of matter that seems to be an insulator, superconductor, metal and magnet all at the same time–the Jahn-Teller metal. This discovery can help scientists understand why different materials achieve superconductivity, allowing us to better understand how to utilize superconductors to maximize energy efficiency.

The Jahn-Teller metal, which is defined to be any metal which reaches the state of superconductivity at high temperatures, is useful to scientists because it also could lead to further development of materials for energy transfer. If they can achieve a constant state of superconductivity with a Jahn-Teller metal, scientists will be able to transfer pure energy without any loss to heat or sound. This in turn would make energy usage more efficient than ever before.

The new type of metal utilizes the Jahn-Teller principle in chemistry, which essentially states that substances with certain electron configurations by nature are geometrically distorted. This geometric distortion is a result of spacially degenerate ground states of the molecule’s elements, and allows the substance to become a superconductor at high temperatures.

According to Dr. Vincent Michaud, a speaker at Jefferson’s tjSTAR symposium event on the topic of aerospace engineering, high efficiency superconductors have applications in the work of the National Aeronautics and Space Administration (NASA). NASA is attempting to design a spacecraft that can carry astronauts to Mars in the next decade, a feat that may only be possible with the use of superconductors. In order to essentially create a “protective shield” around the spacecraft from the sun’s radiation, NASA is seeking to create a large magnetic field that will deflect the sun’s rays. Michaud and his colleagues are working to find an energy source to power such a large magnet, and are beginning to look towards superconductors as the solution.

“The whole concept of Jahn-Teller metals is pretty cool, especially because they could be used for so many practical purposes,” sophomore Jenny Zhang said. “However, I think it might take a few years for the technology to become widespread.”