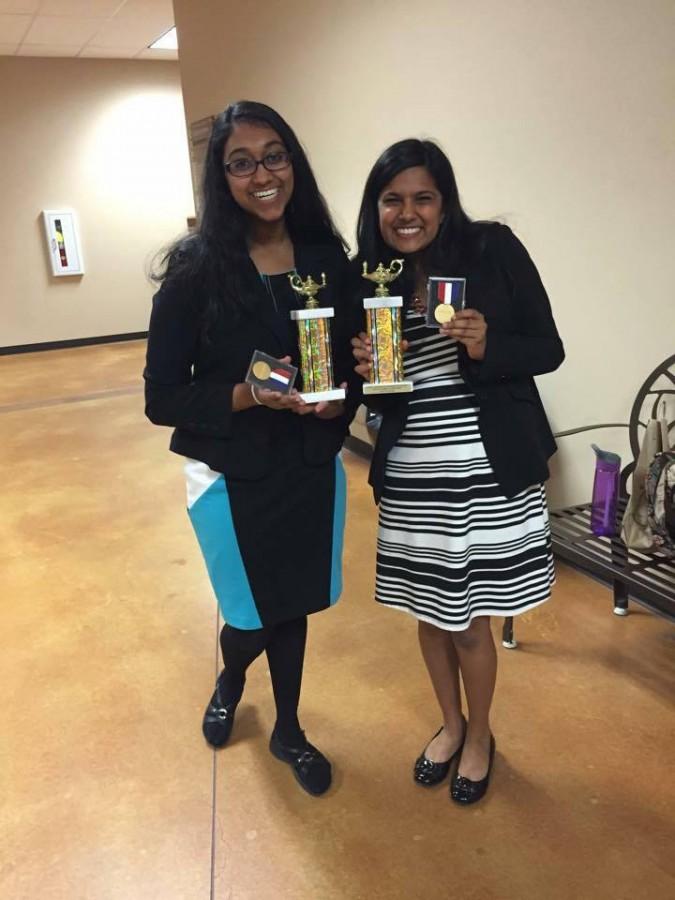 Juniors Kiran Girish and Sahana Ramani show off the awards they have won for debate.

As active members of Jefferson’s Public Forum (PF) debate team, juniors Kiran Girish and Sahana Ramani brought home outstanding achievements for the team this season, continuing their successes since freshmen year. As one of the leading pairs of the team, Girish and Ramani concluded their 2014-2015 season as Virginia High School League (VHSL) champions and double octafinalists for the National Catholic Forensic League (NCFL) Grand National Speech & Debate Tournament, which was held on May 23-24 in Florida.

“It’s definitely been very difficult being a debate in the national circuit from TJ,” Ramani said. “However, we met many of our goals this year, including becoming state champions and qualifying as the top 32 teams at NCFL Nationals. We are hoping that we can continue this progress and qualify for the Tournament of Champions (TOC) next year.”

Close friends since middle school, Girish and Ramani were debate partners even before they came to Jefferson. They believe that their cooperation and compatible personalities acted as the drive for their motivation and achievements in debate.

“I personally love the partnership that I have developed with Sahana the most,” Girish said. “We have been partners for four years now, and we have created such a strong bond that in round we know that what the other is thinking. I think the teamwork plays a huge role in getting over the feeling of anxiety, because Sahana is always there to reassure me.”

Girish and Ramani began their high school debate career by participating in their first regional Washington-Arlington Catholic Forensic League (WACFL) tournament as junior varsity debaters in freshmen year. In their sophomore year, they qualified to the WACFL Metrofinals tournament, in which successful debaters from the five different WACFL tournaments gathered once again to select the region’s best team, and won first place in the varsity division.

“Before rounds begin, we tell each other that no matter who are opponents are or who our judge is, we will give it our very best,” Ramani said. “No matter what happens, we will never leave a round with regret.”

The pair have also brought outstanding results from various national circuit tournaments this year, in which they were octafinalists for the Capitol Beltway Fall Classic held at Walt Whitman High School and participated in the Harvard National Forensic Tournament.

PF debate team is one of the three debate teams that Jefferson is involved in, with the other two being Lincoln-Douglas and Policy debate teams. PF drives discussions in many contemporary topics, and they require the debaters themselves to search up resources and evidence for the tournaments. One special aspect of PF that differs from Policy debate is the change of topics throughout the year. While policy introduces one subject of discussion every season, PF periodically changes the topic during a season, allowing students to gain greater breadth of current events through debate.

“PF prides itself on being the only debate team that tailors to the common person, and I believe that effective communication is a very strong skill to have,” Girish said. “In PF, research never ends, so we are researching up until our first round and even throughout the day at the tournament. We start by reading articles on the background of the topic and then slowly move on to more opinion articles.”

After a successful run, both Girish and Ramani hope to continue their successes for next year.

“After this debate season, Sahana and I accomplished many of our goals such as becoming State Champions and breaking at Nationals. We are very happy with our performance in debate this year and hope to continue improving,” Girish said. “Next year, PF debate will be going to many national circuit tournaments where we hope to succeed. We eagerly look forward to the next debate season with a Tournament of Champions (TOC) bid in the back of our mind.”