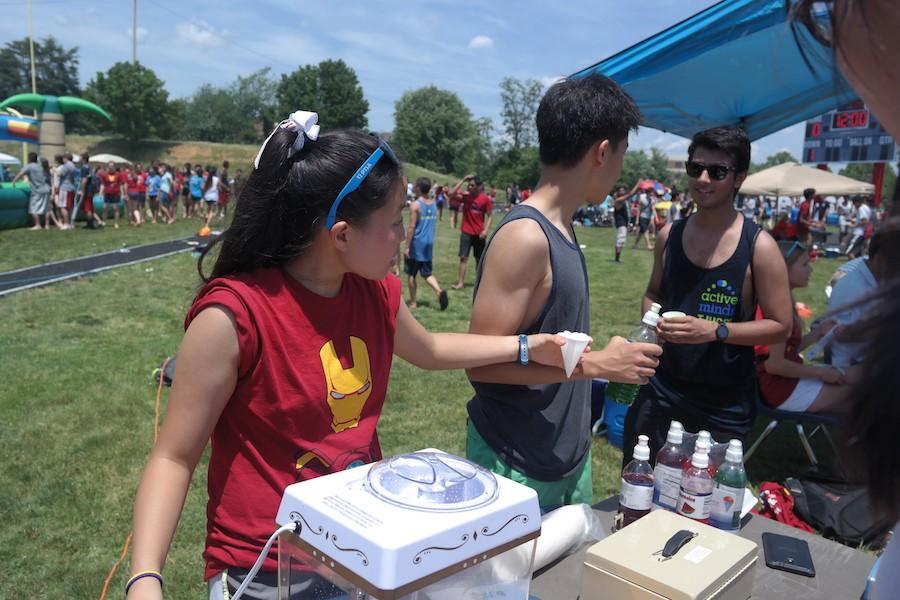 As the hot rays of the sun beat down on their backs, students milled around on the track in 90-degree weather, visiting small kiosks for foods from various different cultures, including samosas, Chinese food and other treats. On June 12, Jefferson held the annual J-Day, a time for students to have fun and clubs to raise money for next year.

For weeks, many clubs went into preparation for the day, hoping to hold fun activities and make or cater food for students to make a good profit.

“We decided to order Chick fil a catering this year, and the turnout we got far exceeded our expectations,” junior and Econ Challenge treasurer, Jay Pan said. “We sold 50 sandwiches in the first fifteen minutes and had to reorder a second batch to fill the demand. Next year, we’ll definitely be buying more sandwiches so nobody waiting for a sandwich has to go hungry!”

Among all the assortments of food available, there were also fun fundraising activities. For example, members of the National Art Honor Society (NAHS) painted on faces and arms, and plastered tattoos. Dot Comedy offered a photobooth, in which students took pictures in front of a green screen, which would later be replaced with a background image. Amnesty International offered polaroid pictures with a fun background, and Namaste offered sponge wars for everyone to cool down on a hot day.

“I had a lot of fun at J-Day this year as I got to eat lots of food and do fun activities such as taking Polaroid pictures with my friends,” junior Kavya Ravikanti said. “However, I wish there had been more activities rather than just food.”

Live entertainment was also an option for students to relax. Dot Comedy also held a stand-up comedy in the auditorium, and live music played at both the track and auditorium.

“I found it amazing that people in TJ have such a wide range of talents,” senior Nihar Gudiseva said. “I also found it incredible that the entire auditorium laughed. I enjoyed every minute.”

Additionally, the ongoing J-Day basketball game culminated to the final game held in the afternoon in Gym 2. Though students needed tickets to watch the game live, a live streaming of the game was offered for the remaining students in the auditorium. Team “1-800-588-2300,” consisting of members seniors Sharan Arkalgud, Kevin Wan, Rohin Dewan and Azeez Abdikarim, won the tournament. During half-time, there was also a special appearance by Jefferson’s Bhangra Bash team.

“It was really cool to see some of my classmates play, and I thought the spirit of the TJ community was awesome,” sophomore Chris Cao said.

For many, J-Day was a great opportunity to celebrate the end of the school year and offered a chance to eat good food with good friends. Seniors, in particular, were saddened to celebrate their last J-Day.

“J-Day was definitely fun but it was also really hot so it was hard to be super energetic,” senior Jennifer Fang said. “Even so, it feels really nostalgic that it was my last J-Day ever but I got to go on the water slide one last time and hang out with my friends so it was a good memory.”