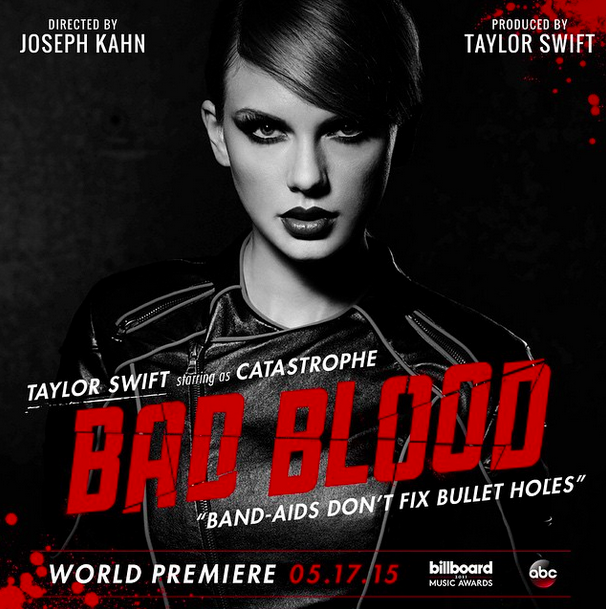 Taylor Swift. People around the globe associate the name to a singer who can connect with her fans by cleverly painting hidden meanings into her catchy tunes. Recently, Swift’s exceptional talent and marketing strategies has earned her a third number-one single off of her latest album, “1989.”

“Bad Blood” is an anthem believed to be inspired by Swift’s friend-turned-enemy, Katy Perry. At award shows, Perry would quickly converse with Swift, and then turn and walk away. The feud abruptly arose when Perry hired multiple backup dancers off of Swift’s “Red” arena tour to be part of Perry’s own “Prismatic” summer tour.

In less than two weeks, the “Bad Blood” music video has received over 100 million views on YouTube. Set in London, the video’s storyline is of a conflict between protagonist Catastrophe, played by Swift, and antagonist Arsyn, played by actress Selena Gomez. In a towering office building, Catastrophe and Arsyn originally fight on the same side to reclaim a briefcase back from robbers dressed in suits. Catastrophe grabs it back, but then Arsyn chooses to blow dust from her makeup palette in Catastrophe’s face. She seizes the briefcase, and kicks Catastrophe out of the glass-paned window so she falls onto a rusty blue car.

Catastrophe is healed in futuristic, technologically-advanced rooms and builds up a team of fighters to get revenge against Arsyn when they next meet. Throughout the video, numerous well-known singers, actors and models are featured to play characters that Catastrophe recruits for their own unique revenge-based talents. Lily Aldridge plays Frostbyte, Zendaya plays Cut-Throat, Lena Dunham plays Lucky Fiori, featuring rapper Kendrick Lamar plays Welvin da Great and Karlie Kloss plays Knockout, among others.

The finale of “Bad Blood” showcases the encounter between Catastrophe and Arsyn, followed by their respective packs, as they come close to fighting.

Swift’s businesswoman side in acquiring recognition for “Bad Blood” is displayed through many factors. She reaches out to hip-hop fans by including a rap from Lamar. In addition, adding well-known women to play the characters in Swift’s video prompt fans to be eager in seeing their favorite stars. “Bad Blood” was also premiered at the Billboard Music Awards to secure an even greater fanbase.

According to “Page Six,” Swift borrowed thirteen thousand dollars worth of costumes for the video. The money was put to good use, because the “Bad Blood” anthem has transformed into an action sequence that viewers will remember for months to come.