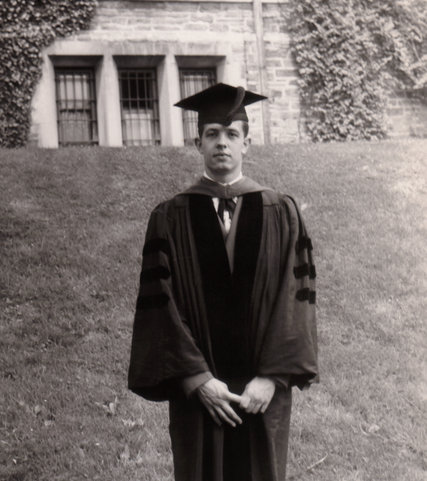 John Forbes Nash at his graduation from Princeton in 1950.

Any student who has ever taken any kind of economics course in the past few decades has heard of John Forbes Nash. He is the man who took the accepted economic theories of his time and toppled them in favor of a more accurate and comprehensive model of how firms function. He is the mathematician who won the Nobel Prize in 1994 for his work in economic theory. And he is the inspiration for the book and film “A Beautiful Mind,” which showcases his genius and unfortunate struggle with schizophrenia.

John Nash, simply put, shaped the economic theory that we accept today. Adam Smith said that everyone in the group benefits from doing what is best for himself. Nash revised this theory, and correctly stated, that everyone in the group benefits most when they do what is best for themselves depending on what the other members of the group do. This theory, known as Nash Equilibrium, is used in modern day game theory economics and has completely altered how businesses approach each other and how the economy works.

Yet this prodigy who shattered our misconception on economics, did so while suffering from a severe mental disorder known as schizophrenia. He advocated for those suffering from a mental illness and attempted to reduce the stigma surrounding people who do.

Unfortunately for the world, John Nash and his wife, Alicia Nash, were both killed in a car accident on Saturday in New Jersey. He was 86 years old. Princeton University, where Nash attended, and Russell Crowe, the actor who played Nash in “A Beautiful Mind” were some of the first to tweet their shock and remorse over the couple’s passing.

John Nash was a man who solved problems that had vexed and eluded scholars for centuries before him, yet at the same time has paranoid delusions and once even declared himself the Emperor of Antarctica. He was a man who shattered former beliefs, both in economics and in terms of the correlation between mental illness and intelligence. The world will miss John Nash long after he passes, for he truly was a genius and prodigy among mortals.