New school year will bring changes to the schedule 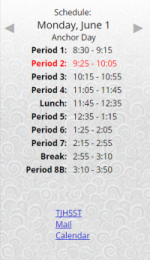 Starting next year, JLC will be moved to Monday between 4th and 5th period

On May 15, Principal Evan Glazer announced that there will be no Jefferson Learning Community (JLC) at Jefferson on Thursdays next year. Instead, there will be a 40-minute JLC followed by a 30-minute lunch period on Mondays. The change in JLC timing also means that there will no longer be eighth periods on anchor days. The school will also begin and end 10 minutes later, at 8:40 a.m. and 4:00 p.m.

The change comes in response to a county wide push to standardize the amount of school hours.  Additionally, FCPS wishes to improve school equity by making start and end times constant, as most other schools do not have the flexibility to alter their schedule. Although Glazer attempted to keep JLC on Thursday, the school district’s leadership team would not allow it to be every week. Thus, the school had to decide whether to make JLC every other week, or find an alternate solution.

“After a lot of deliberation, the answer is, it would create too much confusion for students,” Glazer said. “We need to come up with a solution that honors JLC and also has something with consistency to minimize confusion.”

The solution was to move JLC to the middle of Monday and eliminate eight periods. That being said, clubs can still meet during JLC on Mondays and clubs with large memberships can be moved to either Wednesday or Friday. Despite attempts to compensate for the loss of JLC on Thursdays, students are still having mixed reactions.

“I think it is weird that they are moving JLC to another time because we are so used to having a late start on thursdays that having an extended lunch on Monday is going to be crazy and it might not really benefit us in any way,” freshman Sharmila Roychoudhury said.

Other students also question how useful the the 40-minute break period is.

“We get to sign up for eighth period study halls on Monday, so its like moving the timing of eighth period and taking JLC away,” freshman Maya Parker said.