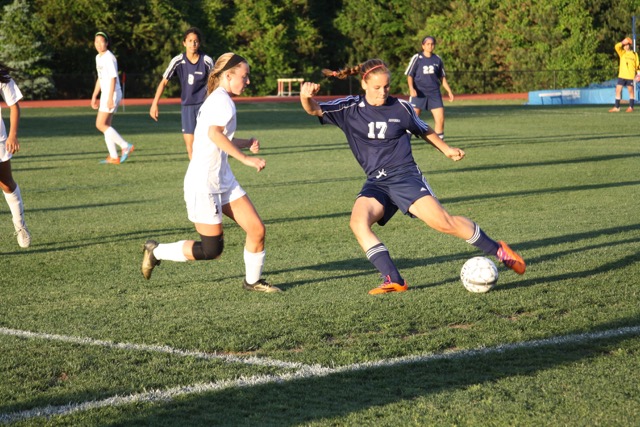 Junior Maaike Blindenbach passes the ball up the field in the Capitol Conference Semifinal game.

Only three minutes into the game, JEB Stuart High School scored a goal causing the Jefferson girls’ varsity soccer team to be down a goal in the Capitol Conference Semifinals. Moving back into the kick-off formation, the Jefferson girls brushed off the unfortunate start to the game and refocused; they needed to win the game to advance to the Capitol Conference Finals.

Throughout the rest of the first half, the teams played equally on both halves of the field. Each team had several plays and crosses that led to near goals, but neither team managed to score throughout the remaining time in the first half. Only four minutes into the second half, however, junior Chelsea Li beat Stuart’s defensive players and scored a goal and tied the game. Twelve minutes later, sophomore Raquel Sequeira made a beautiful curved shot to the far corner of the goal and put Jefferson in the lead for the first time in the game.

“Our comeback was amazing and I had no doubt we could do it,” junior Sonia Gupta said. “Although, especially as a defender, I was upset that we let them score, it was more important that we were energized and ready to come back. Even though earlier this season and last season we beat Stuart in games, it was good to prove ourselves in the semifinals.”

Last year, the Jefferson girls’ varsity soccer team also reached the finals in a similar defeat. In their semifinal game against Stuart High School, the final score was three to two after a major comeback by the Jefferson team. In the finals they lost in double overtime with 30 seconds remaining in the game. The entire team hopes to change this outcome this year in the final.

“This game represented the culmination of all of our efforts this season,” junior Priya Gupta, captain of the varsity girls’ soccer team, said. “We had some tough losses earlier in the season, but we kept our heads high and kept playing with our highest level of intensity and momentum and this game shows that. Even though we were down one goal early in the game, we all believed that we could win and in the end we did.”