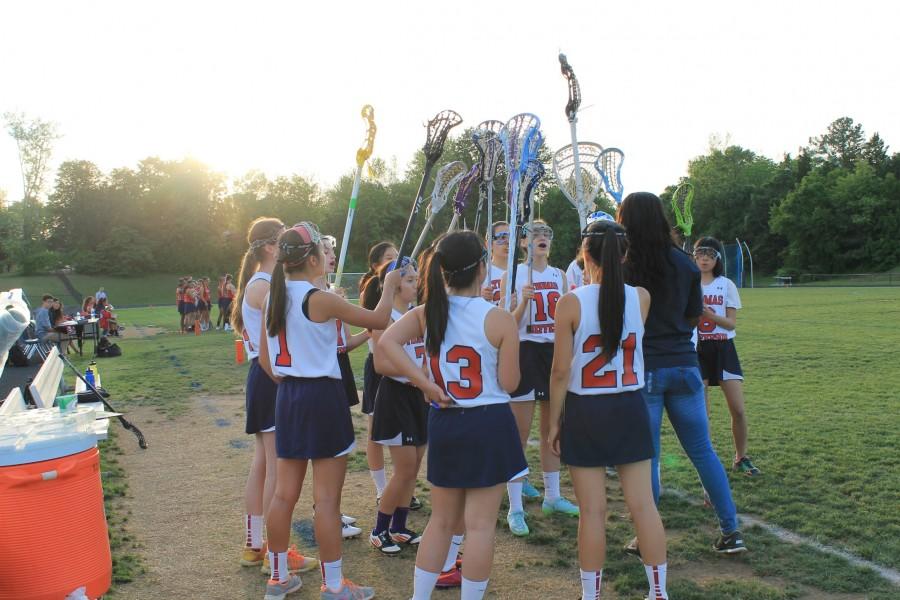 The Junior Varsity (JV) Girls Lacrosse team huddled in a circle around the perfectly lit field. They brought their lacrosse sticks up in the sky, towards the center, and yelled, “TJ… Does work!”

On Thursday, May 14, Junior Varsity (JV) Girls Lacrosse played their last game of the season against Thomas Edison High School. After their first win in two years against Lee High School the day before, the lacrosse team was extremely hopeful for their game.

At the start of the game, TJ was at a disadvantage when the referee threw the ball up in the air and one of the Thomas Edison attackers caught, cradled, and passed the ball. A startled TJ goalie was unable to process the ball in time, and Thomas Edison ended up scoring.

For the rest of the game, it seemed that Thomas Edison received many penalties, including but not limited to rough check, holding, and illegal contact penalties.

Even so, Jefferson ended up losing against Thomas Edison, 2-9.

Despite the loss, there was an overwhelming amount of spirit ensued in all of the girls as they played their last game and reflected on the whole season.

“I think we did amazing,” sophomore Vivian Dong said. “We improved so much since the first game. We communicated well, and everyone put in their best effort, both on defense and attack.”

The team is grateful for the teamwork improvement since the beginning of the season, but also recognizes room for improvement. Since JV Lacrosse mostly consists of freshman and sophomores, it was the first season playing all together for a lot of players.

“In the future I think we need to learn to work together better and be more comfortable with each other,” sophomore Caroline Nguyen said. “Even though our playing together as a team during tryouts and now is not even comparable, there’s definitely room for improvement in communicating with each other.”

“I’m going to miss spending time with some of my best friends before games the most,” freshman Melanie Le said. “I loved dressing up like crazy people for spirit days.”