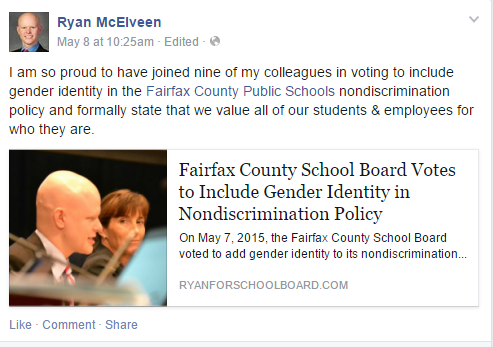 On May 7, the School Board added gender identity to the categories included in the Fairfax County Public Schools (FCPS) nondiscrimination policy. FCPS announced that this addition will help to promote equality for all students and teachers and protect against discrimination and other forms of harassment.

“I think that the addition of gender identity will help gender-queer kids, as well as bring attention to them,” freshman Masha Goykh, a member of Jefferson’s Gay Straight Alliance (GSA), said. “Because of this policy, FCPS is starting to think of mixed-sex bathrooms for nonbinary kids and allowing trans kids to go to the bathroom of their gender.”

Adding gender identity to the nondiscrimination policy was first proposed by FCPS Board Member Ryan McElveen after Virginia Attorney General Mark R. Herring discussed the possibility of its incorporation. McElveen played an important role in pushing his proposal through, and he believes it is essential for preventing harassment and bullying of the lesbian, gay, bisexual and transgender (LGBT) community of students and faculty.

“I decided to bring forward the issue because it is absolutely essential that we do everything in our power to protect our most at-risk students and show that they are valued at the highest levels of our school system,” McElveen said. “The fact that we had legislators and other advocates come out against the policy change proved how necessary it is to have those protections for our students and employees.”

However, some students still feel more action must be taken to achieve true equality. According to senior Hugo Kessler, the vice president of Jefferson’s GSA, the policy change is only the first step to bringing about long-lasting change.

“I’m pleased that gender identity has been added to the nondiscrimination policy, but I don’t want the school board and FCPS as a whole to feel like they’re done,” Kessler said. “Bathrooms in schools are still separated for the gender binary, teachers and students still assume pronouns, sex education still assumes sexuality and gender, and there’s a general lack of information given to students and teachers about everyone in the LGBTQ+ community. This is just the first step in a seemingly endless road.”