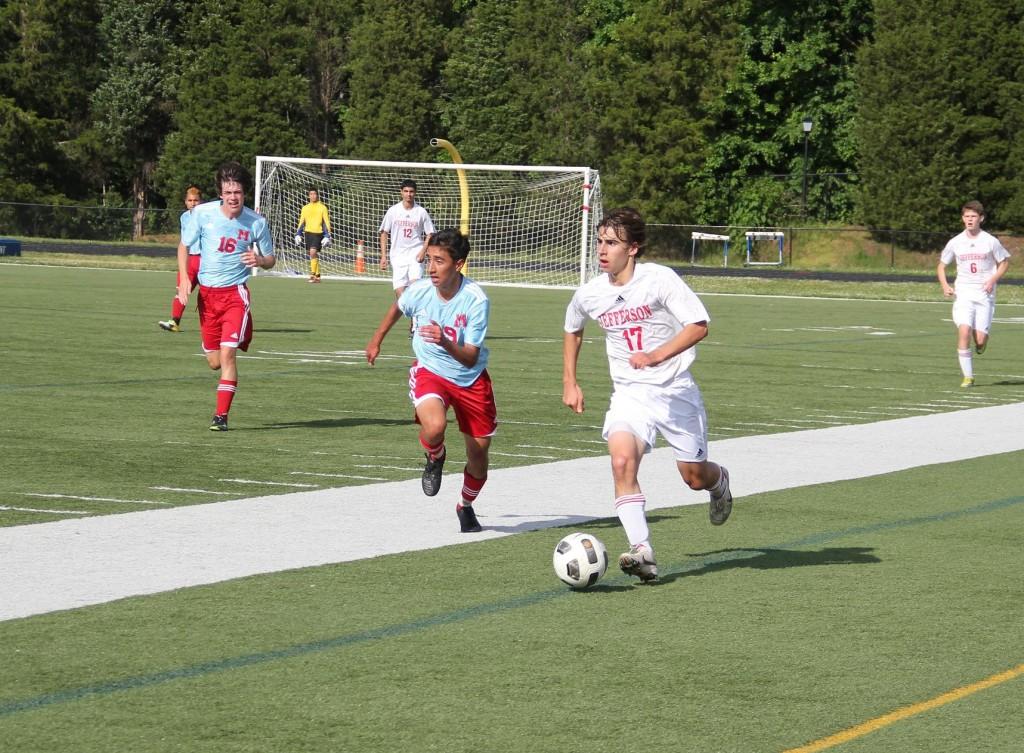 After finishing regular season play with a record of 6-1-6, the boys’ soccer team was ranked first in the Liberty District and began their district tournament play with a 3-0 win against the Marshall Statesmen last night.

The game was originally scheduled for Monday at Jefferson but was moved to Fairfax High School’s turf field because of rain.

The Colonials took control of the game early with two back-to-back goals within the first 15 minutes. Beginning with a well placed shot by junior Andrew Freix, junior Alex Sands was able to follow up with another goal with an assist from junior Pedram “Weezzey” Pejman.

“Weezzey weaved his magic up the right side and slid the ball across the goal mouth to the back post where Sands made no mistake about the finish,” Head Coach Sean Burke said.

The Colonials took a less aggressive approach in the second half, keeping cool while the Statesmen played a physical game that granted the Jefferson team numerous penalty kicks.

“They were very physical. One of their guys even came out bleeding,” senior Andrew O’Shea, who plays midfield, said. “It was good that the referee called a clean game.”

With a more defensive strategy, the Colonials looked to their goalkeeper, senior Alex Park, who had his fourth consecutive shutout with the win against Marshall. After a lot of back and forth play in the second half, senior Victor Weiss, also at midfield, got another goal off of the Statesmen defense.

The boys will next take on the winner of the Stone Bridge-McLean game, to be played tonight.

“It was awesome to win the District in the regular season, but it doesn’t go up on the banner in the gym unless we win the district tournament,” O’Shea said. “It would be nice also to get a crowd out there for our games.”