“Fiddler on the Roof” reflects hard work of cast and crew 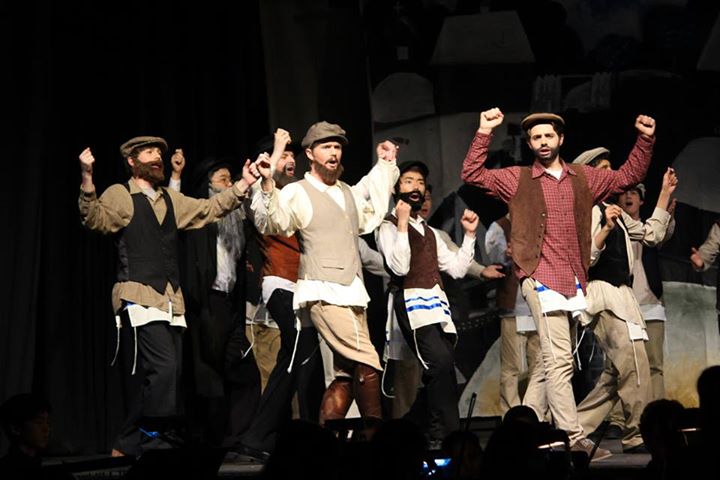 The show “Fiddler” centers around Jewish Tevye (Moore), a poor dairy man struggling to survive in the Russian town Anatevka with his wife Golde (Becker) and their five daughters, the three eldest of whom, Tzeitel (Lukas), Hodel (Martinese) and Chava (Das), are just coming of age and falling in love. Each one falls in love with someone more difficult to accept than the last, with Tzeitl loving the poor tailor Motel (Guidroz), Hodel the unemployed radical Perchik (Ryjik) and Chava the Russian Gentile Fyedka (Bernard).

Moore played Tevye expertly, with charm, humor and not-so-subtle exasperation at God, at whom he frequently directs monologues. Peterson, who played the matchmaker Yente, also brought humor to the show.

Musically, “Fiddler” was also excellent. Although some of the main actors were not as good at singing, Martinese shined when singing “Far From the Home I Love,” a goodbye song as Martinese’s character leaves for Siberia. The orchestra played beautifully, especially senior Anna Tsutsui, who played the literal fiddler on the roof at several points during the show.

The dancers featured in “Fiddler,” although not part of the cast, certainly brought the show to life. The Russian Gentiles were brought in to dance periodically throughout the play, and each time was both humorous and fun. There were also ballerinas featured as shadows during a remembrance of Tevye’s that gave more effect than just acting.

The costumes were plain, as befit the play, but the costuming allowed the audience to differentiate between the Jewish characters, who wore head coverings and vests for the men, and the non-Jewish characters. The set, on the other hand, was beautiful, centered around a large piece that could be turned around to be either the inside or the outside of Tevye’s home.

“Fiddler on the Roof” was entertaining and funny, yet also full of heart. The work put in by Jefferson Drama is clear in their rendition.