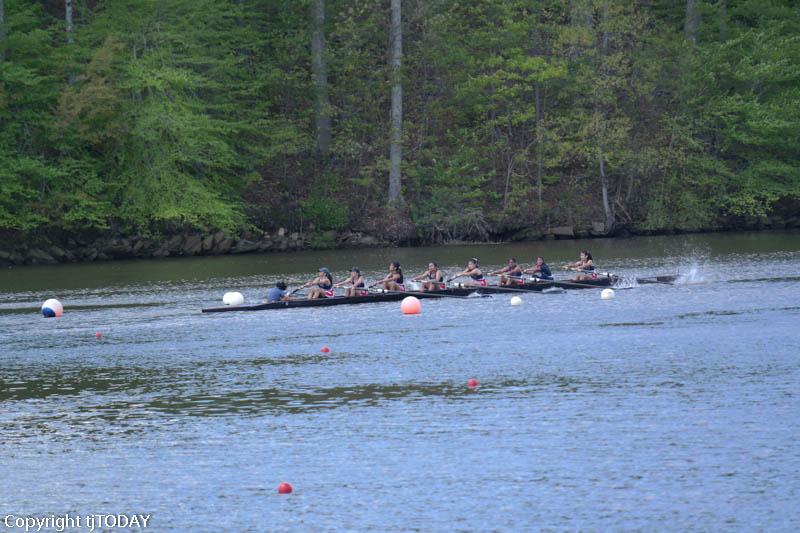 As the sun shone down on the Occoquan River, crowds in the grandstands erupted in periodic cheering as the boats for each race came close to the finish line. was part of the Ted Pheonix Regatta at Sandy Run Regional Park in Fairfax Station, VA, the state championship for the lower boats for each school that was held on May 2. Jefferson girls’ crew competed their third and fourth-tier boats and their freshman boat.

The freshman boat, consisting of coxswain freshman Melanie Kurapatti and rowers freshmen Artemis Veizi, Erin NewRingiesen, Julia Damron, Maggie Kirtley, Emma Choi, Christine Zhao, Yael Cohen and Melly Song, placed third in the semifinals race, which moved them onto the final race. In a close race for third, fourth or fifth in finals, the freshmen took fifth. However, they did not qualify for nationals, but will compete in future races including the Stotesbury Cup Regatta in Pennsylvania.

“I really thought we could make nationals, and it was definitely hard to miss by so little, but I think we have definitely improved from the beginning of the season, and I’m looking forward to Stotes,” NewRingeisen said.

The third-tier boat, for which juniors Claudia Richoux, Diane Lee and Olivia Marcantonio and sophomores Emma Cuddy, Roma Chitko, Sunny Truslow, Rebecca Mays and Jamie Do rowed at the regatta and sophomore Cece Brower coxswained, got a third-place finish that will allow them to petition for a spot at nationals.

“I was thrilled to medal,” Cuddy said. “I had hoped we could do better because we’ve won a few races this season, but we were going against some really fast boats this week and I think we did really well.”

Sharma believed it was her boat’s mindset that allowed them to take home first place.

“The day before the race we could think of nothing other than winning,” Sharma said. “Our boat was constantly motivating each other during practice and even up until minutes for the race, we were cheering and getting ourselves ready for the victory to come.”

However, Sharma believes it is important for the team not to rest on their laurels.