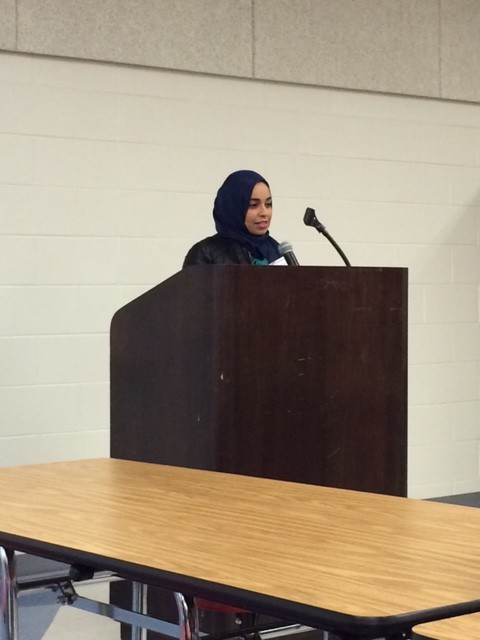 “I thought holding an Islamic awareness event was necessary, especially after the Chapel Hill Shooting, Charlie Hebdo Shooting, the “ISIS” Crisis throughout the media, and a myriad of other different events,” senior Al Hussain Ahmed, the vice president of the MSA, said. “Some of my peers approached me asking more about Islam and what it says about so and so. But then I realized that other faiths face adversities and people hold various misconceptions and stereotypes just like Islam so I talked to our fellow faith groups at TJ, the FCA, CSA and JCC and they were all on board.”

Student and guest speakers both attended. Seniors Reem Mohammed and Azman Garcha Singh and junior Joshua Holtzman discussed misconceptions about their faiths, Islam, Sikhism and Judaism respectively. Steven Wayne Able-FCA Regional Director, Dr. Merehan Esmat Alhady, and artist Joshua Salaam also spoke at the event. The event was generally received by students, many of whom gained a clearer insight into religion than is offered in the media.

“I thought it was interesting to contrast the other faiths, because I did not know what they believed in. It definitely helped dispel misconceptions, it was nice how they defined things you hear in the news,” freshman Julia Buchinsky said.

Although the point of the event was to correct any misunderstandings, it also served as a way for students to learn more about religion in general

“I did not know much about Sikhism and Islam before. I always though Sikhism was an offshoot of Hinduism, and with Islam I was always confused about why people chose to wear headscarves, and this really cleared it up,” junior Keqian Jiang said.

The Jefferson interfaith event was able to both facilitate and understanding or religion and increase the student body’s awareness about faith.

“Recently I have been feeling critical about religion,” Jiang said. “But this event really helped me understand it.”