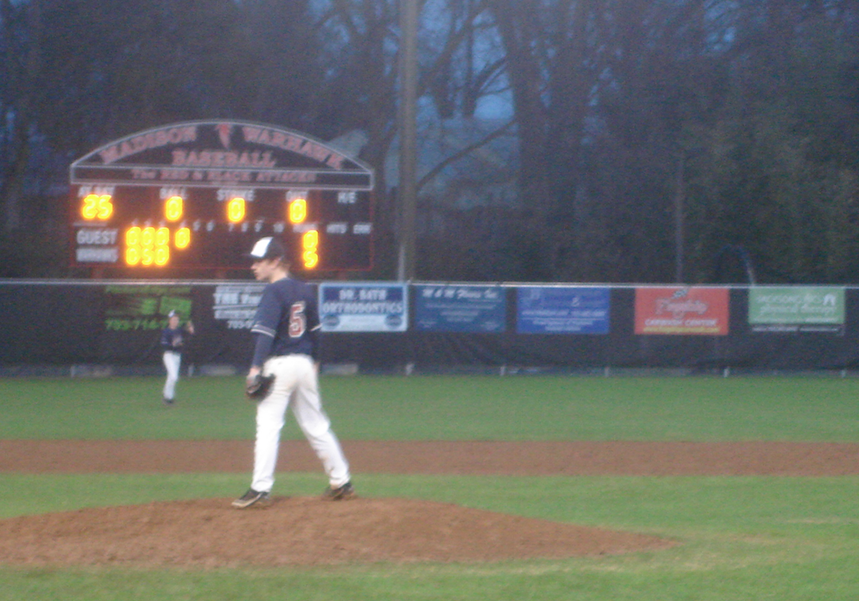 Pitcher Sam Case practices pitching balls during the middle of the fourth inning.

Despite a forecast of rainy weather and the cancellation of other sports games, Jefferson junior varsity baseball team played against the Madison Warhawks on Wednesday, April 8th. The game ended after the top of the fifth inning, with a final score of 14-0.

With a loaded field of Madison runners, Jefferson closed the first inning in a tie of 0-0.

“Early on in the game we were playing well,” left fielder Carson Wishard said. “The score was still low and we were holding our own against Madison, who is one of the best teams in the area.”

While Jefferson had zero runs, Madison scored five runs by the end of the second inning. However, during the third inning, sophomore Quinlan Dawkins successfully batted the ball and reached first base. Jefferson finally had a chance to score runs as they started to load bases.

“After Quinn Dawkins singled and then from an error and a walk, we loaded the bases,” pitcher Pratyush Gupta said. “But the next batter struck out.”

Madison scored nine more runs in the fourth inning, leaving the game with a total of fourteen runs. Despite losing, Jefferson had done their best to prepare for the game by practicing everyday after school and studying different types of situation that could happen in game.

“We knew we were going up against probably the toughest team we were going to see this year,” Wishard said. “We just had to go in knowing that it would be a tough game and that we would have to play our best despite the weather.”