Inventor profile: Lakmazaheri is selected to participate in the 2015 International Science Fair 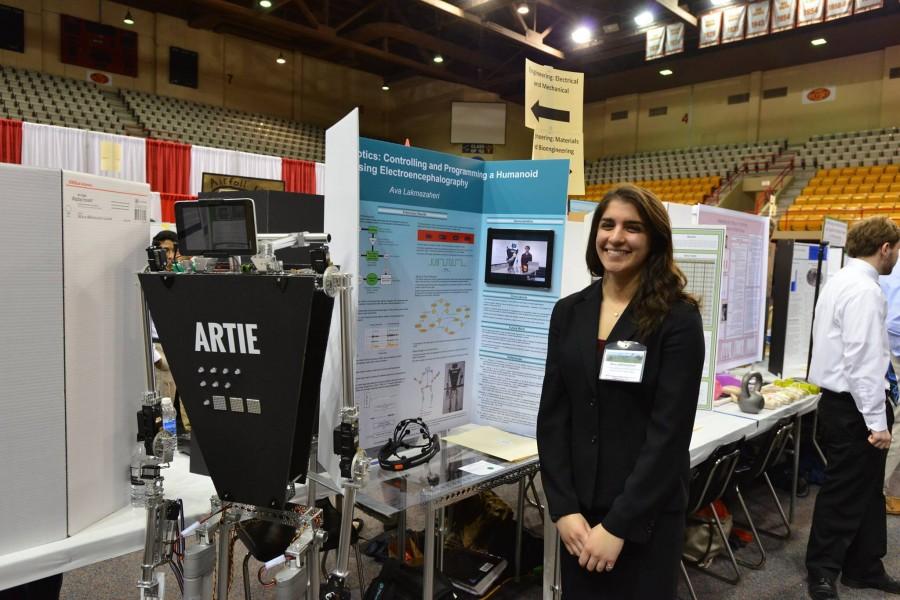 Astounding the judges, Ava Lakmazaheri has been working on a brainwave-activated robot since the summer, when she stumbled upon a life-changing video.

The summer before her junior year, Lakmazaheri signed up for an online neuroscience class on a whim, and came across a video demonstration of a brain-computer interface (BCI) that allowed a woman with tetraplegia (a paralysis caused by physical injury or illness) to control a robotic arm with her brainwaves, allowing the woman to pick up a cup of coffee and take a drink. The technological advancements and touching story of the woman with tetraplegia triggered Lakmazaheri’s interests. She had already been interested in neuroscience, and decided that she would use BCIs in her science fair projects. She combined her interests in robotics and neuroscience to create her project, and hopes to use her robot to make a difference in people’s lives in the future.

Lakmazaheri started working on engineering projects at a young age. She has been building robots since elementary school and has competed in numerous robotics competitions since middle school.

Since the beginning of her junior year, Lakmazaheri has been working on developing a software and hardware infrastructure that can support brainwave signal generations and process schemes for object manipulation by a humanoid robot. She has also been working on the design of a dexterous anthropomorphic robotic hand.

Past competitions and recognitions:

Q-and-A: On April 12, tjTODAY interviewed Lakmazaheri for being invited to compete at the Intel International Science and Engineering Fair.

Q: What was the process of being selected to go to the International Science Fair?

Q: What were your thoughts when you found out you were going to Internationals?

A: It was really exciting to be recognized for my work and I felt so fortunate to be given a chance to participate in the international fair this year. It was an amazing feeling to realize that among so many qualified individuals, you are one of the few who is given this opportunity.

Q: What is your favorite part about completing your project?

A: After years of working with navigational robots, it was pretty exciting to design and build my first humanoid. But beyond that, I really enjoy the challenge of figuring out how to map raw brainwaves into robot actions.

Q: What do you love the most about your project?

A: I find the long-term goal of my project very meaningful, and I love the idea of being able to design and build a brain-actuated exoskeleton that one day can bring about a qualitative improvement in the lives of people with physical disabilities.

Q: When/how much time do you dedicated to your project?

A: Most of my work has taken place during the summer and holidays this academic year. At school, I spend about three hours per week working on my robot at the JUMP Lab. At home, I Spend a few more hours on research, brainstorming, or programming every weekend.

Q: What are your goals for the future of your experiment?

A: There are various technical issues that need to be addressed for effective human-machine interfacing. I will be researching and addressing some of these as well as issues pertaining to humanoid and exoskeleton robot design for the foreseeable future. Eventually I would like to be able to build and distribute commercially available brain-actuated systems that would benefit people with physical disabilities.

Q: What are you looking forward to the most at Internationals?

A: I am really looking forward to meeting and exchanging ideas with students with similar projects from all around the world. I also hope to find a few students who I can collaborate with on my project.