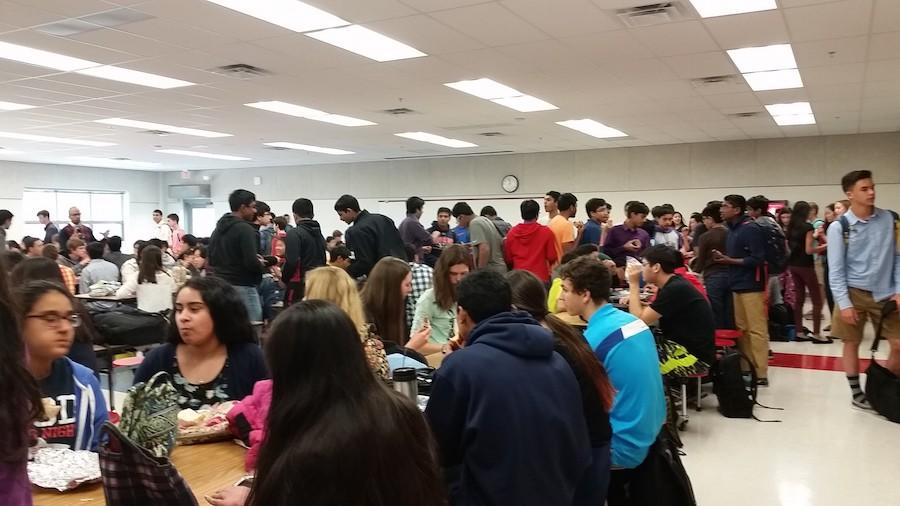 On April 7, students eat in the newly renovated cafeteria.

As of the beginning of the school year, students at Jefferson had been using Gym 2 as their alternate cafeteria. Tables and chairs are set up every day in the front half of the gym in the morning and during lunch, while the back half of Gym 2 is used for recreation. Food carts are set up around the school, and everything is constantly being rearranged, adding to the workload of the staff at Jefferson. However, after spring break, on April 7, this is not the case anymore.

The new cafeteria is built in the lower left corner of the school’s first floor, along with the kitchen, a few computer classrooms and some of the new senior research labs. It is available to all students for use a few days, if not directly, after spring break ends. Its opening will end the use of Gym 2 as an eating area for students–mainly freshmen, as many are found eating in Gym 2 daily–and will keep the gym clean of trash and dirt left behind from students’ lunches.

“Closing Gym 2 as a lunch location will definitely help with the trash problem there,” freshman Adithi Ramakrishnan said. “The gym is meant for physical education more than it is for lunch. Opening the cafeteria will help localize the trash problem to one place and keep the gym clean.”

Many students were looking forward to the opening of the new cafeteria space, with progress updates constantly being sent out, and with multiple photos taken by other students posted on Facebook. However, after the past few months, some freshmen prefer eating in Gym 2, and believe that the need for a new cafeteria isn’t really necessary in the first place.

“I’m not really looking forward to the new cafeteria,” freshman Zulekha Tasneem said. “I don’t think there’s much purpose for a cafeteria when not many people will sit there anyways.”

While many students have found Gym 2 to be a great place to hangout, it’s been frequently noted that the gym is also very chaotic and hot during lunch. However, the addition of the new cafeteria may remove much of the mayhem that arises in Gym 2 during lunch. And even though the freshmen class has varying opinions on the topic, many are still looking forward to the benefits of a cleaner, less-chaotic and finally normal cafeteria.

“I have eaten in Gym 2 before,” freshman Stephan Seo said. “I’ve eaten all over the place. But now, with the new cafeteria, we’ll have a consistent place to go and eat.”