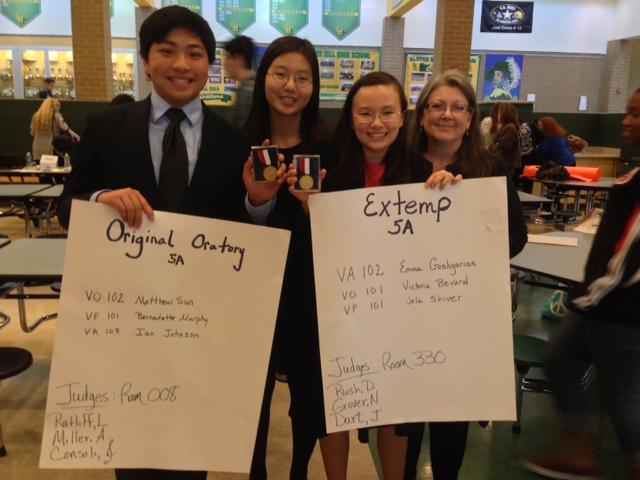 The Speech team advanced three people through the District and Regional meets to the state tournament. Senior Aria Kim competed in Prose, junior Matthew Sun in Original Oratory and sophomore Victoria Bevard in Extemporaneous Speaking. Sun is the captain of the Speech team’s Non-Interpretational events, and Kim is the captain of the Interpretational events.

“I am very grateful to VHSL for organizing such an extensive tournament, our school and activities office for giving us the opportunity to compete and our amazingly supportive coach Ms.Bakke,” said Sun. “I worked really hard for this tournament and enjoyed sharing my oratory with people across the state.”

The Jefferson Speech team is coached by Marie Bakke, who is also the coach of the Jefferson Student Congress Debate team. Both teams meet Friday A and B block. The Speech team has a total of about 25 students, who compete in a variety of speaking events.

“The team performed quite well and I’m very proud of them. I feel that their hard work this year really paid off,” Bakke said. “Qualifying three people to states, and winning two categories is incredible, and I hope that this win will encourage our team to work harder and strive for even greater performances.”

The Speech team competes in other tournament circuits beside VHSL, such as the National Catholic Forensics League (NCFL) and the National Speech and Debate Association (NSDA). They qualified three people to the upcoming May NCFL Grand National tournament this year, junior Matthew Sun in Original Oratory, junior Virginia Sun in Original Oratory, and sophomore Victoria Bevard in Extemporaneous Speaking. However, VHSL States was the last non-national tournament of the year.

“As a senior this was my last ever speech tournament,” said Kim. “It’s a bittersweet moment, but I feel that qualifying to VHSL States was a great way to end my high school speech career. I’ll always look back and remember my years in high school speech with happiness.”

With the season coming to a close, the Speech team is already planning for next year.

“Our goal next year is to win the VHSL Speech State sweepstakes,” said Sun.