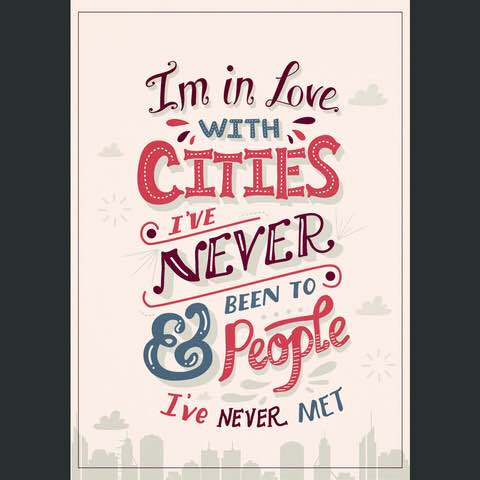 Purchase a copy of the poster at http://store.dftba.com/products/cities-ive-never-been-to-poster.

“I’m in love with cities I’ve never been to and people I’ve never met.”  Until recently, this quote was attributed to John Green’s 2008 novel “Paper Towns.”  However, the quote was actually written by then 13-year-old Melody Truong, one of Green’s many fans.  Truong’s original post on Tumblr was re-blogged and shared, finding its way to multiple social media sites.  Fans assumed the quote was John Green’s, as Truong frequently posted pictures of John Green quotes on her account.

After seeing many posts with the quote identified as part of “Paper Towns” on the Internet, Green mistakenly assumed the quote was his. He even sold posters with it on his website, store.DFTBA.com. In a video he posted later about the incident, he claims that he honestly did not remember writing the line, but also protesting, “I don’t remember writing a lot of ‘Paper Towns!’ That book came out seven years ago!”

It was only when a friend of Truong’s posted about the incident on a Reddit copyright forum that Green realized that the quote wasn’t his.  Apparently, Truong had faced a lot of degrading comments on social media, telling her that she was stealing a quote from John Green, when in truth it was the other way around.

To make amends, the author split the royalties from the poster on his website between Truong and its artist, and even began selling an original poster of Truong’s on his website.  Green also posted a video on YouTube apologizing for his mistake, in which he mentioned that this incident “speaks to how screwed-up credit and sourcing and copyright are on the Internet. We do an epically bad job of acknowledging one another’s work and checking our sources.” He also tries to back up his mistake with the question, “How many of us have failed to fact-check something on the Internet? Most, I would think.”

In Green’s YouTube video, he tends to contradict himself throughout the video by repeatedly acknowledging his mistakes, only to excuse them later. He also seems to accredit the Internet more than he blames himself for the incorrect association of the quote.  The quote may have spread with the wrong author’s name next to it because of a misled assumption on the Internet, but fault also resides with Green for assuming that it was his.  “Paper Towns” may have been released seven years ago, but it is surprising that Green would have an artist create a poster displaying a quote from a book before confirming that the quote was actually his.  Despite Green’s serious error, he politely recovered by giving full credit to Truong for her ideas and creativity.

Though this plagiarism incident has blown over for now, it does shine light on an interesting question: how much more misattributed information still remains on the Internet?  We constantly use the Internet to express our own ideas and passions through various social mediums.  If the New York Times bestselling author can sign a fan’s quote with his own name, it’s not too hard for us to do the same.  The Internet contains an exodus of information, but it is necessary to constantly and consistently check sources to prevent accidental plagiarism from occurring.  For all we know, there are hundreds of creative people like Truong still trying to hold their name next to their work.

Green’s plagiarism, though unethical, is just one instance of misled credits on the Internet. In his video, he himself mentions how his name has been falsely printed next to various other quotes in the past that aren’t his, and really the brainchild of other equally intelligent and inspirational people. Everybody deserves acknowledgement for his or her own work, and it is up to us to protect this right when we are online.