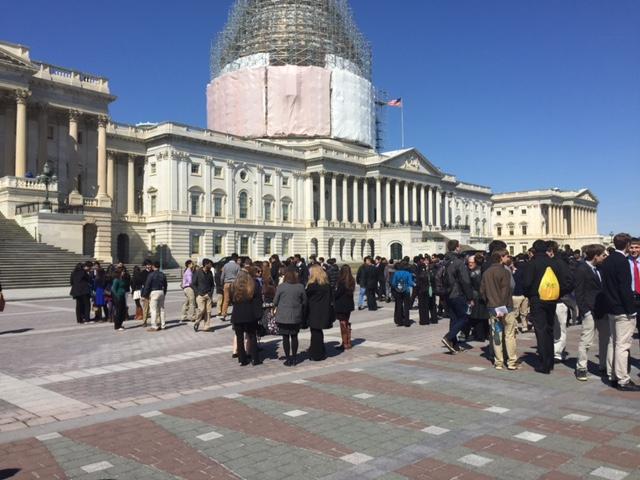 Seniors congregate in front of the Capitol to hear Representative Don Beyer speak.

Although the Capitol is right in Jefferson’s backyard, many students have difficulty fitting trips into their busy schedules. However, the senior class had an opportunity on Monday, March 23 to visit the area on and around Capitol Hill as a part of their AP Government curriculum.

In the morning, students could choose from a variety of options to fill up the open time, such as visiting the office of a member of Congress, the House of Representatives and Senate Galleries, the Capitol Hill Visitor Center, the Supreme Court Museum or Supreme Court oral arguments, the Library of Congress, the Senate Document Room and the Folger Shakespeare library.

“I probably found the Library of Congress to be the most personally enjoyable,” senior Callan Monette said. “I thought that the architecture was beautiful and the exhibits were really interesting!”

Unfortunately, although the Supreme Court Oral arguments were one of the most popular choices, it was also one of the least accessible as the room fills up quickly.

“We waited there for about 40 minutes, but we noticed that the groups that had been waiting since 8:30 had not budged at all, so we didn’t want to waste our time,” senior Aria Kim said.

After the free time in the morning, students were able to meet with and have question and answer sessions with Representative Don Beyer (D-Va.), Senator Mark Warner (D-Va.), reporter James Homann from Politico and associate professor of political science at George Washington University John Sides.

“I’d say the most valuable was the group meeting at the end, with the speaker from Politico and the political scientist because they gave a talk more aimed at how we garner information about politics,” senior Aidan Hennessy-Niland said.

Monette believes that for next year’s seniors, planning is key for a successful trip.

“Check the weather in advance, don’t spend three hours waiting to get into the Supreme Court if the line’s super long, and try to check when congress is in session so you can go see it!” Monette said.