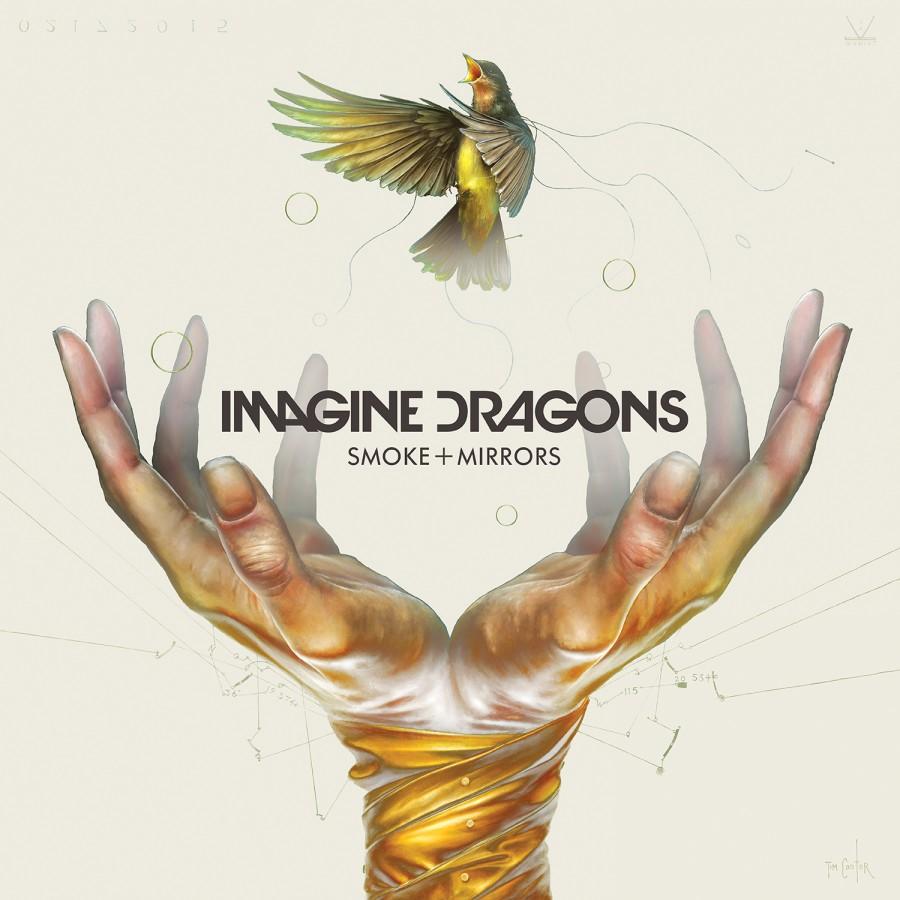 On Feb. 17, the indie rock band, Imagine Dragons finally released their long-awaited sophomore album, ‘Smoke + Mirrors.’ Following the worldwide success of their 2012 debut album, ‘Night Visions,’ ‘Smoke + Mirrors’ was received with high expectations and bubbling anticipation. Since the album’s release, it has already debuted at the #1 position on both the US Billboard 200 and UK Album charts.

‘Smoke + Mirrors’ opens up with an eccentric track ‘Shots,’ which shares a dark lyrical meaning of messing everything up, using the metaphor of being a loaded gun—which shot through life. It pairs dark lyrics with a light, high-pitched, and upbeat vocals from the lead singer, Dan Reynolds. The overwhelming use of synthesizers in the background also lightens the song’s mood. This track eases listeners into the following rock-based tracks, such as ‘Gold’ and ‘I’m So Sorry.’

The next song on the track list, ‘Gold,’ features catchy anthem-like bass drops and whistling. The heavy drums and stretched words are not unlike older tracks from the band’s extended plays (EPs), such as ‘Curse’ and ‘Cover Up.’ However, this album dives deeper into the rock face of the band than any of their previous songs with pronounced beats throughout.

The title track, ‘Smoke and Mirrors,’ provides a break from the string of rock songs, with Reynold’s smooth, high-pitched vocals. This stretch is briefly interrupted with a ear-bursting crash of drums. This unfamiliar smoothed out style is also unprecedented in any previous songs, and sounds as if Imagine Dragons is yet again trying to find and create their own unique sound. Even so, this melting pot between indie rock and pop is welcomed.

The following songs, ‘I’m So Sorry” and “Friction’ are a harmonic union between Reynold’s powerful lyrics and thunderous drums. While the two were both unexpected strictly-rock driven tracks, ‘I’m So Sorry’ radiated a fiery pumped aura while ‘Friction’ rang out blunt and cutting vocals.

The last song on ‘Smoke + Mirrors’ is ‘The Fall.’ The title alone seems incredibly ironic for a mega rock band. The mellow tunes, soft base line, and long stretches of instrumental leaves listeners on a happy note. Long-time Imagine Dragon fans will recognize the occasional bouncy vocals and similar melodies from the bands earlier EP, ‘Hell and Silence.’With ‘Smoke + Mirrors,’ Imagine Dragons are moving away from their previous, pop based style shown in the debut ‘Night Visions’ with more uniquely toned and varied sounds.. This change is proven successful and fans can finally enjoy new music.