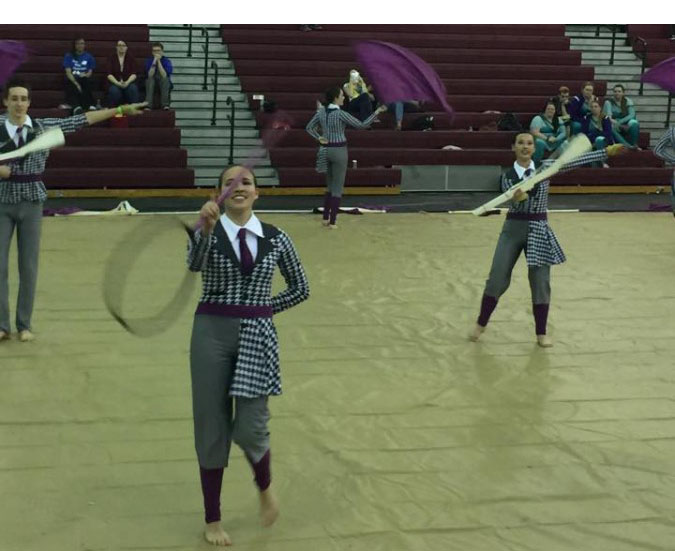 This past Saturday, March 21, Jefferson’s Indoor Color Guard Team competed in an event held by the Atlantic Indoor Association (AIA) at Board Run High School. Guard performed their show called “221B Baker Street,” based off the BBC show “Sherlock.” The team won third place in their division, Scholastic A2, with James Madison High School’s varsity guard winning first.

“I like this year’s uniforms,” senior Natalie Diaz, co-captain and member of the Guard for three years, said. “Usually we spin flags, rifles and sabres, but this season we’re even spinning magnifying glasses.”

Guard competes several times each season, with the winter seasons culminating in a performance at the Winter Guard International Finals in Dayton, Ohio. This year, the finals are slated to occur from April 16-18, with hundreds of both scholastic and world-class guards competing.

“We get judged on what we do and how well we do it in four categories: equipment, body, design analysis and general effect,” junior Kevin Chaplin, member for three years, said. Chaplin describes guard as “physically demanding and beautiful at the same time, but well worth it.”

Apart from normally competing during the winter, Guard is also part of the Thomas Jefferson Marching Colonials (TJMC), Jefferson’s marching band, during the summer. Senior Brian Junitlla was one of the drum majors of the marching band this year, directing the members as they perform, and also attended the guard competition this past weekend.

“My sister is in guard at Chantilly and I go to watch competitions that Chantilly and Jefferson are in,” Juntilla said. “In marching band, they add a visual effect that the band cannot achieve on its own. The effect, when done well, allows for the audience to be even more amazed with a performance.”

Guard at Jefferson has two seasons, one in the fall and one in the winter. The fall season starts off in July, with interest meetings taking place in June, while the winter season starts in November. Freshman Grace Young, the only freshman this year, started last June.

“I love guard, it’s my favorite part of the week! I made my best friends in guard and I love spending time with them, and at the same time, I love the feeling of constant improvement with my guard skills. It makes me feel like I’m a valuable part of a team, “ Young said.